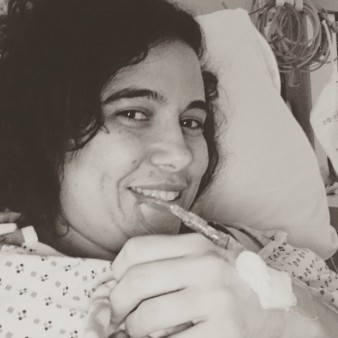 I wrote about my experience walking in to my mastectomy but not too much about the operation itself. Obviously, I was asleep during the procedure and really do not know much more than what the plastic surgeon had told me when I met with their offices about potential reconstruction.

It was something I did not want to know about and certainly did not want to dwell upon the actual mechanics of the surgery. I trusted my hospital and my surgeon, and I did not need to really know how it would be done.

I knew I would wake up with just a flat area where my right breast would be, I knew I would no longer have a nipple or any sensation with or without reconstruction. I understood, in theory, all of this and about the drains, too.

That being said, there is only so much you can fathom until you do it. I know a lot of people who are afraid of mastectomy, or of any operation for that matter. I understand that—I just was not afraid I guess because I was more afraid of the cancer that was growing inside of me than I could be of getting it out.

Fear is a good temporary motivator—it is not something that I could accept living with for the rest of my life, and this from someone who had spent years being afraid, too. I remember as a child climbing the steps to a ride and then chickening out at the last minute and turning around to walk back down, the true walk of shame for a child like myself. Everyone staring at me and judging me for being a coward.

During my diagnosis and pre-surgery visits to Sloan, I felt very much like I was climbing those steps to those rides I had run away from but now, I could not run. I was oddly calm about chopping off my breast even when the question was whether a lumpectomy would work (it ultimately would not have worked)—I was pushing for the mastectomy because deep down I knew, I just knew it would be more than was thought. I have always been an overachiever and I guess it would be so in cancer, too. My main motivator was to get the cancer out—what I did not yet understand was how it got “in,” and that story is for another day.

I woke up from my surgery bandaged up and sore. When I say sore, this could mean anything to others but I have to spend a few lines on my relationship with pain. I have a very high threshold for pain. With childbirth, I pushed for 12+ hours without pain medication and I did not scream the way people seem to in movies and the like—it was not pleasant, of course. During labor, though, I was reading a book I only put down grudgingly when it was time to push and my glasses fogged up too much to read, anyway. For my second child my son was a c-section and a few hours after surgery, I was bending over to pick something up when the nurses began to scream at me. Apparently, after being put back together with staples, one should not bend.

So pain and I are kind of incognizant of one another—I do not react to pain in normal ways. So it was post-mastectomy. I had my bandages and drains and a pink sports bra that Velcro shut in the front but I really was lucky to not have “pain.”

I did have a lot of numbness and if I tried to move my arm too much, bam, there was the pain. I did not have the balls to look at my chest area, though. I was able to chose not to look too closely by just leaving my glasses behind when I had to change my dressing. I am severely myopic and without my glasses on, things were blurry and I liked it that way. I would not be ready to look at my chest until a couple of days later at home. I am not a squeamish person, per se, I just knew that once I saw the breast was gone it would really really sink in that I was now a “cancer” patient and maybe that was just not clear enough before the surgery.

The drains and right side tenderness made it impossible to lay on my right side. I had to lay on my back because I also could not use the muscles to move my body on to my left side, yet. That night, the physical therapist paid a visit and taught me the 6-7 exercises I needed to do to regain mobility in my right arm and also explained to me that from now on, my right arm had to be restricted from all kinds of activities like blood work, blood pressure, oh and also from cuts and burns if at all possible as so many lymph nodes were gone it would be hard for my right arm to fight infection.

I did the exercises religiously 6 times a day and before I knew it, I could move the arm a little more easily and could even lay on my left side in bed. The drains were annoying but they were only in for two weeks; when they were removed, it was instant relief of the pinching and the pulling of having drains sewn into your body.

Radiation really had me stretch the right arm to keep it above my head for 10-15 minutes at a time but still 8 months post-mastectomy, my arm is kind of not “normal.” It is weaker than it used to be and I have residual pain in the arm. I am a left-handed person who does everything with my right arm so I am constantly having to stop myself from instinctively using my right arm to reach for stuff, lift stuff and find stuff. It is a challenge for me, though, I am constantly switching to my left arm only after I feel the pain on my right arm.

I was not looking or touching my skin of surgery much until radiation. I had to apply creams to the skin and when the oncologist would touch my right side, it felt like someone was touching me with another body—it is hard to explain but the skin was so dead-feeling I did not really feel she was touching me. Once I began to regularly apply creams and as radiation burned away at my skin, the sense of feeling came back. I am no longer afraid to touch my skin or apply the cream like I was when I first came home from the hospital.

If someone like my children or husband or puppy get too close to my right side, I cringe. My mastectomy is cut deep to the bone so I do not have any “meat” there to stop impact. If my kids bounce into my right chest, I howl.

I do not look in the mirror and get surprised anymore that I am missing a breast. It is just part of me now to know that I am one-boobed and no longer have a pair—they never matched anyway so I am more and more used to it every day.

I hope if you have had a mastectomy, you will share how you felt post-surgery or if you are scheduled for one, maybe this post will help you not worry too much about it.