Rubraca is a PARP inhibitor approved for maintenance treatment of people with recurrent ovarian, fallopian tube or primary peritoneal cancer that is responding to chemotherapy, for previously treated ovarian cancer in patients with harmful BRCA mutations and for previously treated metastatic castration-resistant prostate cancer in people with harmful BRCA mutations. 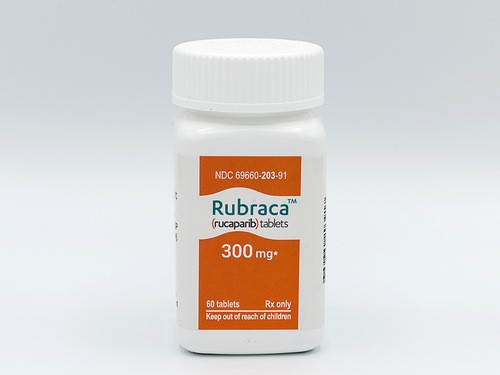 The ARIEL3 trial showed that Rubraca as maintenance treatment improved progression-free survival (PFS) in women with ovarian, fallopian tube or primary peritoneal cancer who were responding to platinum-based chemotherapy. ARIEL2 showed that Rubraca extended PFS in women with BRCA-mutated ovarian cancer who had been treated with two or more chemotherapy drugs. The TRITON2 trial showed that 44% of previously treated men with metastatic castration-resistant prostate cancer with harmful BRCA mutations experienced complete or partial tumor remission. Rubraca was first approved in 2016.

Dosing Info: Rubraca is taken as a tablet twice daily with or without food.