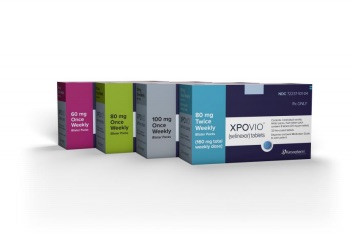 Xpovio is a selective inhibitor of nuclear export (SINE). It works by binding to the nuclear export protein exportin 1 (XPO1), which blocks the transport of many tumor suppressor, growth-regulating and anti-inflammatory proteins. These proteins then accumulate in the cell nucleus, which enhances their anti-cancer activity.

In the Phase IIb STORM trial, patients with heavily pretreated multiple myeloma who used Xpovio plus dexamethasone had an overall response rate of 25%. In the BOSTON study, Xpovio plus dexamethasone and Velcade (bortezomib) showed an overall response rate of 76% and delayed disease progression in people who had used at least one prior therapy. The SADAL study showed a 29% response rate for treatment-experienced people with diffuse large B-cell lymphoma. It was first approved in July 2019.

Xpovio is a pill taken in combination with dexamethasone on days 1 and 3 of each week.

Common side effects include fatigue, nausea, vomiting, decreased appetite, weight loss, diarrhea, constipation and hyponatremia (low sodium level). It can cause depletion of red blood cells (anemia), white blood cells (neutropenia) and platelets (thrombocytopenia), which can lead to infections and easy bleeding. Potential serious side effects may include severe thrombocytopenia and neutropenia, gastrointestinal symptoms and neurological problems. Xpovio may cause fetal harm if used during pregnancy.