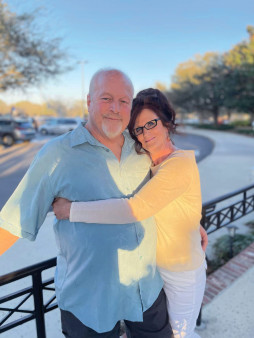 I was born and raised here in Piqua, Ohio. My dad was a farmer, and I grew up working on the farm, growing corn, soybeans and wheat. After serving in the Army after high school, I joined the Piqua Fire Department and continued working with my father in farming. I met Rhonda at the fire department in 1990; we began dating in 1995 and married in 1997. We have three grown children. I retired in 2009 and took over full-time management of the family farm. I was also a pilot and a scuba diving instructor.

I had a small unproductive cough. I didn’t notice it, although everyone else did. I mentioned it at my annual checkup, and my family doc took an X-ray and saw a spot but wasn’t particularly concerned. I decided to wait until after harvest to check it out.

I had a PET scan, and it showed cancer activity in the lungs and throughout my bones—my ribs, spine, neck and hips. Except for the cough, I had no symptoms. I didn’t have any lung cancer family history. I never had a tobacco addiction. I was told I had six months or a year at best. We were numb. At night, Rhonda and I would just hold each other and cry. We told our children; they all came home. We had terrible conversations, got a will in place.

It took three surgeries to get a biopsy. But blood and tissue sampling [from the third attempt at a biopsy] confirmed Stage IV metastatic non-small-cell lung cancer with an ALK mutational driver. That changed everything.

I started a targeted therapy that the Food and Drug Administration [FDA] had approved [for the ALK mutation] and noticed a difference within days—I felt 20 years younger. I was on that therapy for over a year.

We learned from an ALK lung cancer support group that brain metastasis was common. We requested an MRI scan, but our oncologist didn’t think it was necessary, as my body hadn’t shown progression. We continued to push. We got approval for a CT scan, which showed one brain tumor. That let an MRI scan be approved. It showed eight brain tumors. Our oncologist recommended whole-brain radiation [a treatment with significant toxicity], but we were starting to realize that our general oncologist wasn’t up to date.

Rhonda found Alice Shaw, MD, a leading lung cancer researcher at Massachusetts General Hospital in Boston on the internet. She emailed her, explained that I was days away from whole-brain radiation. A shot in the dark but she called. We sent her scans. We did telehealth visits. She told us that I did not need to go through whole-brain radiation, that there was a new targeted therapy. We found a new local oncologist to work with her.

We traveled to Boston, and I started on the clinical trial with the new targeted therapy, which crossed the blood-brain barrier. Within a short time, the therapy had cleared the tumors from my brain, without radiation.

One night, we were sitting around, and I said to Rhonda, “You know, if I didn’t have Stage IV lung cancer, I would be getting a new combine. It could really make things easier for me and also crop-wise.” Until that moment, we had been thinking only months, not years, ahead. We wouldn’t make long-term plans. But that conversation changed our mindset. I bought the combine. And we haven’t looked back since.

As is typical with these drugs, the cancer learns how to mutate around them. I started to have progression in the bones again; new biopsies confirmed the new mutations. At Massachusetts General Hospital with Dr. Shaw, I started on a clinical trial for a third targeted therapy to address the new variant.

We traveled to Boston every three weeks for nearly a year—until the therapy was FDA approved. I had constipation, diarrhea, high cholesterol and weight gain, but they were manageable with more drugs. I went from someone who never took a pill in my life—not even an aspirin—to taking many pills every day. But I continued working on the farm. That therapy worked for more than three years.

I developed edema [swelling] in my left arm. Surveillance imaging with a blood biopsy and biomarker testing revealed active cancer in the armpit lymph nodes and scapula. Biomarker testing wasn’t covered by insurance, but the testing company appealed it. It turned out a new variant was driving the cancer.

I started on intravenous chemotherapy, in combination with the targeted therapy, to stop or slow down progression. Every three weeks, I got a combination of three IV chemotherapy infusions and myriad medications to negate the side effects. It was a toxic combo. They were hoping I could get through four cycles. I did five. They dropped the harshest chemo, and after the next infusion, it was reduced to one chemo agent. I stayed on a reduced dose of the targeted therapy too, since it was still working in a lot of areas. I didn’t have nausea—they gave me steroids and anti-nausea medications—but the fatigue steadily got worse. I decided to retire from farming after the fall harvest.

I had my last chemotherapy on February 9. We took a break to give my body time to heal.

Insurance denied a request, even after appeal, for a PET scan to see if I still had active cancer cells in my bones, my body. We did a bone scan and CT scan of the chest/abdomen, which confirmed new bone mets [metastasis] in the right hip and lumbar spine. We’re restarting IV chemo the first week of May. We’re hopeful about an anticipated new clinical trial for a fourth-generation targeted therapy that’s expected to begin this year.

When I was diagnosed, we were uneducated about the risks of lung cancer, aside from tobacco addiction. I’m sure I was exposed as a firefighter to buildings with lots of toxins. We weren’t aware. We now support efforts to make firefighters eligible for routine lung cancer screenings. We also found out that our home, built in the 1800s with a limestone basement, was high in radon [which causes lung cancer]. What’s shocking is that it costs less than $2,000 to install a system to remove the radon.

We had never heard about biomarker tests or the huge advancements in treating late-stage lung cancer. We had to educate ourselves. I’m 99% sure I wouldn’t be here today if it hadn’t been for people reaching out to me and sharing their experiences and educating us.

For anyone diagnosed with cancer, my message is: Be true to yourself and be as normal as possible. Be smart, put all the safeguards in place, but then make a mental switch. What’s gonna happen is gonna happen. In other words, buy the combine.