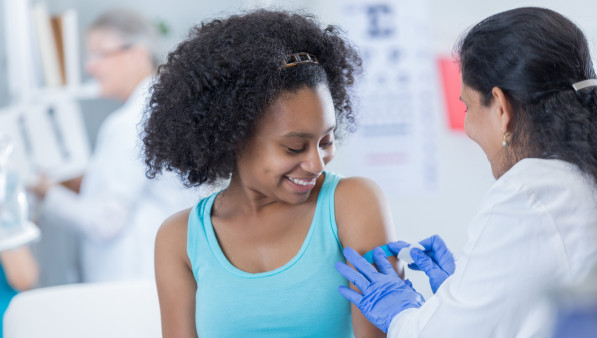 On June 26, the Advisory Committee on Immunization Practices (ACIP), part of the Centers for Disease Control and Prevention (CDC), voted to expand the recommendation for the Gardasil 9 human papillomavirus (HPV) vaccine to include all women and men through 26, though it stopped short of recommending vaccination up to age 45.

The decision comes as a growing body of evidence shows that vaccination reduces infection with cancer-causing HPV types and the resulting precancerous cell changes. Over time, this is expected to lead to a reduction in HPV-related cancer rates—and potentially the elimination of cervical and other cancers in the United States and worldwide.

HPV vaccines were initially approved only for girls and young women ages 9 to 26, as immunization is more effective if given before someone becomes sexually active. Approval was later extended to young men. In 2018, the FDA approved Gardasil 9 for women and men up to age 45.

But ACIP recommendations don’t always match FDA approvals. The committee recommends Gardasil 9 vaccination for boys and girls at age 11 or 12, with catch-up vaccines for those not immunized as adolescents. Before the recent change, ACIP advised vaccination for all women through age 26 and most men through age 21, but for some men—including men who have sex with men and those living with HIV—the upper limit was 26.

Last week’s ACIP decision harmonizes the age variation: Vaccination is now recommended for all women and all men ages 13 to 26 who did not previously receive three doses of the vaccine. The expert committee did not recommend routine vaccination up to age 45, but left this as a shared decision to be made by patients and their providers. Making the vaccine optional for this older group could lead to easier insurance overage.

While the vaccine is less effective for people who already have HPV, some older individuals may not yet be infected with all the covered virus types and could still see some benefit—for example, a middle-aged person re-entering the dating scene after the end of a long-term monogamous relationship. One argument against recommending the vaccine for this much larger segment of the population is that it could lead to shortages that would limit vaccination for young women in low- and middle-income countries.

Importantly, the vaccine does not protect against HPV types a person has already acquired, and experts emphasize that the optimal age for vaccination remains 11 or 12.

“Although administration of the HPV vaccine is safe and effective in patients ages 27 to 45, the target age for vaccination—the age at which vaccination confers the greatest benefits to the patient—continues to be 11 to 12 years," Christopher Zahn, MD, of the American College of Obstetricians and Gynecologists said in a press release.

The ACIP decision was based on a growing body of evidence that demonstrates the benefits of HPV vaccination and raises the hope that HPV-related cancers can be greatly reduced or even eliminated.

A recent CDC study found that there has been a dramatic decrease in the prevalence among young women of the four HPV types covered by the original Gardasil vaccine. A meta-analysis of 65 studies from 14 high-income countries, recently published in The Lancet, showed substantial decreases in HPV infections, precancerous lesions, and anal-genital warts since the vaccine’s introduction. What’s more, countries with high vaccination rates saw evidence of so-called herd immunity, where even people who are not vaccinated themselves are protected.

Melanie Drolet, PhD, of Laval University in Quebec, and colleagues reported that infection with HPV types 16 and 18 fell by 83% among teen girls ages 13 to 19 and by 66% among women ages 20 to 24. HPV types 31, 33 and 45 also decreased in the younger group, many of whom would have received the newer nine-valent vaccine. Precancerous cervical lesions decreased by 51% in teen girls and by 31% in young women. The prevalence of anal-genital warts declined as well, among both young women and young men.

“Our results provide strong evidence that HPV vaccination works to prevent cervical cancer in real-world settings as both HPV infections that cause most cervical cancers and precancerous cervical lesions are decreasing,” Drolet said in a Lancet press release.

Coauthor Marc Brisson, also at Laval, added, “The landscape of HPV vaccination is rapidly changing, with several countries recently switching from three to two-dose schedules, gender-neutral vaccination, and a newer vaccine that targets more HPV types...Because of our finding, we believe the WHO call for action to eliminate cervical cancer may be possible in many countries if sufficient vaccination coverage can be achieved.”

The World Health Organization last year called on all countries to take action to end cervical cancer. Although cervical cancer declined by about 75% after the adoption of routine Pap screening in the United States, it remains a leading cause of cancer death in lower-income countries. Women living with HIV are up to five times more likely to develop invasive cervical cancer, according to UNAIDS. Australia appears to be on track to become the first country to eliminate cervical cancer through widespread HPV vaccination, cervical screening and early treatment.

The day after the ACIP decision, the American Association for Cancer Research, Moffitt Cancer Center and the Biden Cancer Initiative hosted a congressional briefing, bringing together legislators, medical experts and advocates to discuss the need for the United States to do more to end HPV-related cancers.

Health organizations and patient advocates issued a statement calling for complete HPV vaccination of 80% of boys and girls ages 13 to 15 by 2020, screening 93% of eligible women for cervical cancer by 2020, and providing prompt follow-up and proper treatment for those found to have precancerous cervical lesions.

“Continuation of the status quo is not an option,” the joint statement reads. “For the first time in history, we have the opportunity to eliminate up to six cancers affecting both men and women. We call on stakeholders across multiple sectors to join us in making a commitment to realizing the elimination of cervical cancer and other HPV-related cancers globally.”