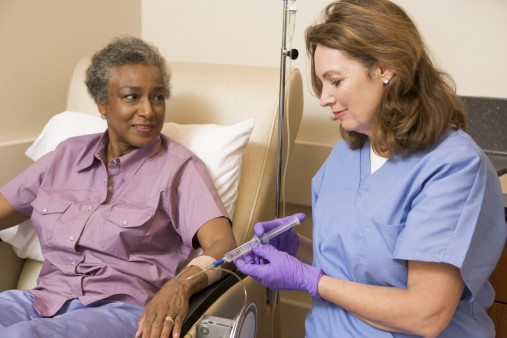 Less than 5 percent of Black patients were involved in trials for 24 out of 31 cancer drugs approved since 2015.

Drugs are safer and more effective for everyone when there is diversity in clinical research, according to the Food and Drug Administration (FDA). Yet, ProPublica reports, many Black people are excluded from important clinical trails for cancer drugs.

“African Americans have the highest death rate and shortest survival of any racial and ethnic group in the U.S. for most cancers,” the American Cancer Society notes. Black people are much more likely to die from breast cancer, prostate cancer and stomach cancer compared with their white counterparts.

Furthermore, one in five people in the United States diagnosed with multiple myeloma is Black, and African Americans are more than twice as likely as white Americans to be diagnosed with this cancer.

So when the FDA approved a new promising drug for multiple myeloma called Ninlaro in 2015 after a successful clinical trial, it was shocking to learn that only 13 (1.8 percent) out of the 722 trial participants were Black.

Such a lack of representation left many to wonder whether Ninlaro would be equally effective for Black patients. (Patients gained an average of six months without metastasis.)

But as the article notes, this isn’t the first instance of racial disparity in cancer drug clinical trial research. Findings showed that less than 5 percent of Black patients were included in trials for 24 of the 31 cancer drugs approved since 2015. (African Americans account for 13.4 percent of the population.)

“They’re potentially losing out on life-extending opportunities because it’s one more option they no longer have,” said Kashif Ali, MD, research head at Maryland Oncology Hematology. “Especially when patients are in advanced stages of cancer, treatments are like stepping stones: When one stops working, you move on to the next.”

According to Ali, African Americans are not enrolled in clinical trials for several reasons, including financial hurdles, logistical challenges and a distrust of the medical system because of past harmful experiences.

Paradoxically, the criteria for admission to clinical trials make it more difficult for African Americans to join. Trials want to enroll “the healthiest sick people they can find,” says Jonathan Jackson, PhD, founding director of the Community Access, Recruitment, and Engagement Research Center at Massachusetts General Hospital. This leaves Black folks at a disadvantage because they’re more likely to have suffered a stroke or to have high blood pressure or diabetes, among other conditions.

However, according to STAT, African Americans are disproportionately enrolled in clinical trials that are exempt from typical individual informed consent requirements. These experiments don’t require that scientists obtain consent from individuals because they are testing emergency medical procedures—such as a CPR method—during which patients are often unable to respond. However, this exemption from consent could lead to a degree of distrust in such clinical trials.

Many have called on the FDA to require pharmaceutical companies to include more minority patients in trials. But according to FDA spokeswoman Gloria Sanchez-Contreras, the agency “does not have the regulatory authority to require specific levels of minority representation in clinical trials.”

Those in the medical and science fields will have to find ways to build trust within minority communities so that more people of color with cancer will want to enroll in clinical trials that could potentially help save or extend their lives.