The Art of Living with Cancer

While treatment keeps her Stage IV bladder cancer at bay, Shelley Kerr, 66, taps into her creativity, making sculpture and music.

Every August, the Benson Sculpture Garden in Loveland, Colorado, hosts the largest outdoor juried sculpture show in the country. The 2020 show was canceled due to COVID-19, so Fort Collins–based artist Shelley Kerr was excited to learn the show was on again in 2021. She was one of more than 160 national and international artists chosen to participate.

Kerr had attended the exhibition in the past, but this was her first time showing her bronze sculptures, which take inspiration from Greek letters, a stellar constellation, the Trojan horse and her eight-year fight with urothelial carcinoma, which affects the lining of the urinary tract and is the most common type of bladder cancer.

At the show, one family kept returning to view her sculptures, “and then they announced that they were going to buy the Nebra Sky Sisters”—a bronze sculpture inspired by the seven sisters of the Pleiades constellation—Kerr recalls. “There’s nothing about cancer in this piece—it’s just art. But I’m looking at this woman, and I said, ‘You know, I have to tell you, I’ve been fighting bladder cancer for eight years.’” Acting on instinct, Kerr shared her cancer journey.

“She just looked at me, and she says, ‘I don’t know if I should tell you this, but my mother just died two weeks ago from cancer, and this piece is my healing.’ We both just held each other and cried.” For Kerr, this story brings to mind the Greek word meta, which means higher or above. “The interaction went to a higher, unexpected level of connection—that I was able to produce something of beauty that helps someone else fight and deal with this disease,” she adds.

Riding the Breakthrough Waves
As unlucky as it is to get bladder cancer when you don’t have any of the typical risk factors—being male, smoking, a family history of the disease, exposure to environmental toxins—she considers herself “super lucky” to have benefited from recent breakthroughs in treatment for the malignancy (see Basics: Bladder Cancer Treatment).

Kerr was first diagnosed with urothelial cancer in 2014 when doctors found a tumor the size of a Ping-Pong ball in one of her kidneys, near her bladder. She subsequently underwent traditional treatments.

“I was a little naive about how serious this was,” she admits. “I just thought, Well, let’s do what needs to be done. I have two kidneys; take it out.” Her left kidney was removed. Later, in 2014, she was treated with BCG (bacillus Calmette-Guérin), an immunotherapy used for early-stage bladder cancer. But in early 2015, Kerr was found to have Stage IV bladder cancer. She switched doctors and underwent a full course of chemotherapy, followed by surgery to remove the organ and create a neobladder using part of her intestines. Then, in the fall of 2015, her cancer came back a third time.

She and her husband, Dave, were driving from Minnesota, where they lived at the time, to visit family in Colorado for Thanksgiving. “We were in the middle of Nebraska on Interstate 80, and I’m thinking, Goodbye—this is my last holiday.” At a rest stop on the highway, she called her oncologist to set up her first chemo appointment, and he told her there was a change in plans: no chemo; instead, they would try immunotherapy.

“I had no idea what the efficacy of the immunotherapy was going to be, but I felt differently about it,” she says.

She started on a PD-1 checkpoint inhibitor, an immunotherapy drug that unleashes the brakes on the immune system so it can find and attack tumor cells. It was experimental for bladder cancer at the time, but her doctors convinced her insurance company to cover it. The drug proved to be a turning point.

“The analogy that I use as I have moved from one treatment to another is that I’m body surfing,” Kerr says. “I’m riding a wave until the wave dissipates. And then I run and get on another wave. I’ve done that three times now.”

The latest treatment wave is an antibody-drug conjugate (ADC). Kerr’s oncologist, University of Colorado’s Thomas Flaig, MD, initiated ADC treatment in January 2020—it had been approved by the Food and Drug Administration a month earlier—to address cancer that remained in her lymph nodes after a course of radiation (see “Special Delivery”).

Last September, Kerr developed pancreatitis (inflammation of the pancreas). Tests revealed that the urothelial cancer had spread to her pancreas, and she went back on the ADC. After three infusions, she no longer had symptoms, and her blood tests were normal. She’s not out of the woods, but she feels strong and good. 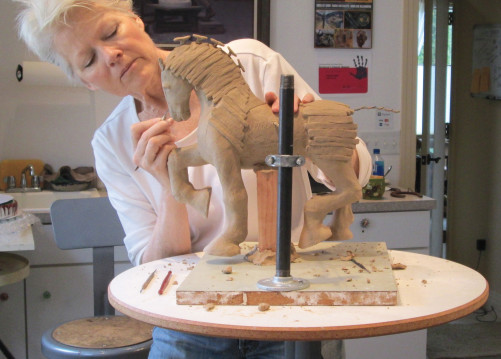 What Does Art Have to Do With Cancer?
Ironically, it was cancer—though not her own—that spurred Kerr to take up sculpture again after a many-year hiatus. A high school art teacher had planted the initial seed, inspiring the teenage Kerr to create clay, metal and wax figures, including one she still has (“a reclining figure that reminds me of Rodin, if I could be so bold!”). But life led her on a different path, and she subsequently earned a degree in biology and held various jobs in real estate and other fields.

Then, in 1989, her father died of lung cancer. As part of her grieving process, Kerr bought clay, intending to build a model of a pack of Camel cigarettes and then, cathartically, destroy it. She bought the clay but instead started sculpting other pieces, learning and advancing her art without any formal training.

In 2018, in the middle of her own cancer ordeal, she found that art, life and cancer converged again. “This battle has driven me to a more creative state,” she wrote on her blog that December. “This is a precious time. I could have died two years ago, but I’m alive and feel healthy. I’m in high gear to express life and art…. I choose life, expression, joy, sharing—all forms of love—over despair.”

Each project she tackles requires research and solving challenges. To thank her doctors after her immunotherapy treatments, for example, the first challenge was how to represent cancer in an art form. Since modern medicine has its roots in Greek culture, she asked her nephew, a Greek scholar, to “give me some words to play around with.”

She settled on three letters—zeta, alpha and omega—which became To Live, a lyrical merging of the letters’ forms in bronze atop a sinuous column engraved with the Greek words for soul/life (ψυχη), art/skill/technology (τεχνη) and healer/physician (ψυχη).

When Kerr’s doctor described her ADC treatment as a Trojan horse—an ingenious way to sneak a toxic drug inside cancer cells—she was inspired to sculpt a magnificent bronze version, based on images of Belgian draft horses. She described the piece, Breakthrough, as “a powerful horse spirit breaking through the armaments of the Trojan horse: the cart, the wood and the metal.”

Kerr unveiled the piece at the September 2019 annual symposium of the Albert Institute for Bladder Cancer Research at the University of Kansas, which attracts national and international bladder cancer researchers and clinicians. She’s spoken at the symposium several times. “I’m like their poster child, because I’ve been through so much that I touch on their research pretty often,” she says. 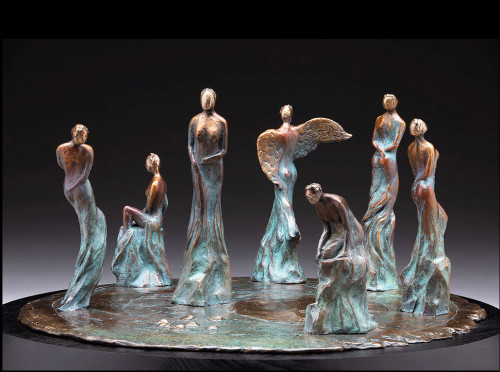 The Four Pillars
Cancer continues to bring focus to Kerr’s art. “There is a piece that I intend to build called The Four Pillars,” she says. She and her husband came up with the concept. “When I was very sick, my husband and I would lie in bed at night and measure our day by the four pillars: Did I love? Did I give? Did I learn? And did I create? This piece has been floating around in my mind, but it wasn’t coming into physical form.”

Over time, she realized that there was a fifth element, an orb that the four pillars support. She named it enthios, from the Greek work meaning “inspired.”

Still, the piece wasn’t coalescing, and it certainly was not for want of trying.

Then, last fall, when cancer showed up in her pancreas, “this was serious for me because I never heard good things about pancreatic cancer,” she says. “It brought everything into focus again.” Although she still doesn’t know what The Four Pillars will look like, she says, “I think the idea is that you would be able to hold this round object and meditate on your day and life in joy with these aspects—Did I love, give, learn, create and live my life?—and then put it back on the stand. I had been tossing this around in my mind for months, and then with this recurrence of the cancer, it just went pshht! There it is. I know what it is now.”

Waging War, Seeking Peace
Kerr’s presentation at the Albert Institute last fall was about how people discuss cancer. She conducted a search that uncovered the numerous battle metaphors used to speak about the disease. “You ‘win the fight’; you’ve got ‘killer’ cells,” she says, mentioning just two examples. “When I had radiation, the machine was called a linear accelerator, and that sounds like a weapon.”

But there’s another aspect to dealing with cancer that involves acceptance and receptivity—to the experience, to allowing your body and medicines to take on the illness, to living with it.

“There is harmony, journey, voyage, expedition, creativity,” Kerr says. “I determined that I experience both [sides]. There are times I pick up a weapon, and I’m like, ‘Let’s get this kidney out of here.’ And other times that I have the luxury of building this orb—that’s a complete creative process.”

In addition to making sculptures, Kerr feeds her creative spirit by making music with her husband, an accomplished guitarist. She sings and plays keyboards and the accordion. They cover rock ’n’ roll and whatever else they like. “When we’re playing music, there’s nothing but the present moment,” she says. “It validates our love, the intensity of our being together.”

As for the future, Kerr at first laughs. She and Dave recently acquired a beloved German bird dog named Rango. “We don’t know how long he’s going to live, hopefully 12 to 15 years. And I’m hoping to outlive the dog!

“This thing could take me out at any point,” she adds. “You know, I do what I need to do. I will fight the fight. I think I’ll always be in that place to do what needs to be done. Because I like my life. And I’m not done. I am not done.”