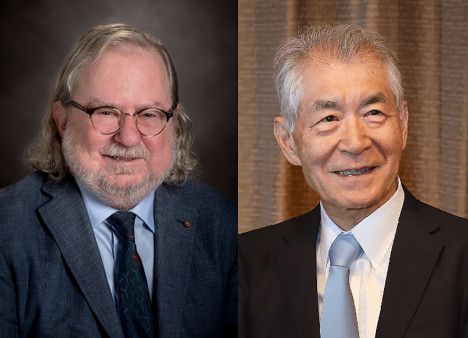 On October 1 the Nobel Prize in Physiology or Medicine was awarded to two scientists who made key discoveries that led to the development of checkpoint inhibitors, one of the major breakthroughs in cancer immunotherapy.

“Cancer kills millions of people every year and is one of humanity’s greatest health challenges,” the Nobel Assembly of the Royal Swedish Academy of Sciences said in its announcement of the award. “By stimulating the inherent ability of our immune system to attack tumor cells, this year’s Nobel laureates have established an entirely new principle for cancer therapy.”

James Allison, PhD, a director at the Parker Institute for Cancer Immunotherapy at the University of Texas MD Anderson Cancer Center, found that blocking the immune checkpoint CTLA-4, which suppresses T-cell multiplication, can restore the immune response against cancer. While at the University of California at Berkeley in the mid-1990s he showed that a CTLA-4 blocking antibody could cure cancer in mice.

Allison’s research laid the groundwork for the development of the first checkpoint inhibitor, Yervoy (ipilimumab), approved by the Food and Drug Administration in 2011 for the treatment of metastatic melanoma and currently under study for several other types of cancer in combination with Opdivo (nivolumab).

Tasuku Honjo, MD, PhD, of Kyoto University, discovered PD-1, an immune checkpoint receptor on T cells that plays a role in regulating immune function. Some tumors can hijack PD-1 to turn off immune responses against them. Drugs that block the interaction between PD-1 and its binding partner, known as PD-L1, can release the brakes and restore T-cell activity.

Honjo’s work led to the development of the PD-1 blockers Keytruda (pembrolizumab) and Opdivo, both approved in 2014 for melanoma and now indicated for several types of cancer. A third PD-1 inhibitor, Libtayo (cemiplimab), was approved last week. There are also three approved antibodies that block PD-L1, Bavencio (avelumab), Imfinzi (durvalumab) and Tecentriq (atezolizumab).

The Nobel Assembly announced the awards Monday morning in Stockholm. Allison and Honjo will share a prize of about $1 million.

“After the initial studies showing the effects of CTLA-4 and PD-1 blockade, the clinical development has been dramatic,” the committee wrote. “We now know that the treatment, often referred to as ’immune checkpoint therapy,’ has fundamentally changed the outcome for certain groups of patients with advanced cancer…. Intense continuing research is focused on elucidating mechanisms of action, with the aim of improving therapies and reducing side effects.”

Allison responded to the award in an MD Anderson press release. He also offered impromptu remarks at the  International Cancer Immunotherapy Conference taking place this week in New York City.

“A driving motivation for scientists is simply to push the frontiers of knowledge. I didn’t set out to study cancer, but to understand the biology of T cells—these incredible cells travel to our bodies and work to protect us,” Allison said. “It’s a great, emotional privilege to meet cancer patients who’ve been successfully treated with immune checkpoint blockade. They are living proof of the power of basic science, of following our urge to learn and to understand how things work.”

“We need these drugs to work for more people,” Allison continued. “One challenge is that the clinical success has outrun our scientific knowledge of how these drugs work and how they might best be combined with other therapies to improve treatment and reduce unwanted side effects. We need more basic science research to do that.”

“This work has led to remarkably effective, sometimes curative, therapy for patients with advanced cancer, who we were previously unable to help,” said NCI Director Ned Sharpless, MD. “Their findings have ushered in the era of cancer immunotherapy, which along with surgery, radiation and cytotoxic chemotherapy, represents a ’fourth modality’ for treating cancer.  A further understanding of the biology underlying the immune system and cancer has the potential to help many more patients.”

Click here to read a press release from the Nobel Assembly announcing the award.