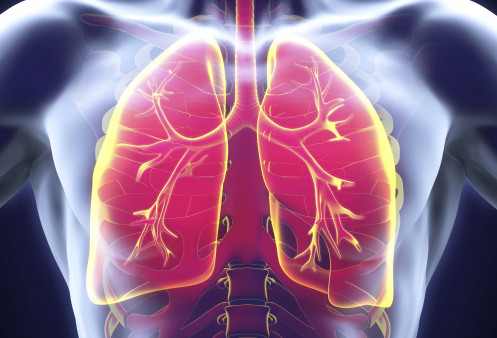 Longer-term follow-up data presented at the recent World Conference on Lung Cancer (WCLC), hosted by the International Association for the Study of Lung Cancer (IASLC), show that checkpoint inhibitor immunotherapy improves overall survival for people with advanced non-small-cell lung cancer (NSCLC), including those with the lowest PD-L1 levels.

The leading cause of cancer-related death in the United States and worldwide, lung cancer is often diagnosed late and remains difficult to treat despite advances in precision medicine and immune-based therapy. Although the new treatments work only for a minority of patients, those who respond well are surviving much longer than would be expected with older therapies, which have a five-year survival rate of less than 5%.

PD-1 is a receptor on T cells that plays a role in regulating immune function. Some tumors can hijack PD-1 to turn off immune responses against them. Drugs that block PD-1 or its binding partner, known as PD-L1, can release the brakes and restore T-cell activity. Some studies have found that people with higher PD-L1 levels in their tumors do better on this type of treatment, but this is not a reliable predictor of individual response.

The Food and Drug Administration (FDA) has approved these medications alone or in various combination regimens for specific groups of patients depending on their PD-L1 level, disease stage and prior treatment history. The FDA sometimes grants accelerated approval based on improvements in objective response rates, meaning complete or partial tumor shrinkage, or progression-free-survival (PFS), meaning people are still alive without their disease worsening—endpoints that are reached earlier in the course of treatment. But the gold standard for demonstrating the effectiveness of cancer medications is improved overall survival (OS), which requires longer follow-up.

Martin Reck, MD, PhD, of Lung Clinic Grosshansdorf in Germany, presented three-year data from the Phase III KEYNOTE-024 trial, which compared Keytruda alone versus platinum-based chemotherapy as first-line treatment for people with advanced NSCLC with high PD-L1 levels (50% or greater expression) but without targetable EGFR or ALK mutations. Those who experienced disease progression in the chemotherapy group could cross over and take Keytruda.

The latest results show that Keytruda provides a durable overall survival benefit compared with standard chemotherapy. The median overall survival duration was 26.3 months with Keytruda versus 14.2 months with chemotherapy. The three-year OS rates were 44% and 25%, respectively. In a subgroup of 10 people who stopped Keytruda after disease progression but received a second course later, the response rate was 70%. Although Keytruda recipients were treated nearly three times longer than chemotherapy recipients, they experienced fewer severe side effects.

“With more than three years’ follow-up, first-line pembrolizumab monotherapy continued to provide durable long-term OS benefit versus chemotherapy despite a majority of patients assigned to chemotherapy crossing over to pembrolizumab,” Reck said in an IASLC press release.

While these results are good news for people with high PD-1 levels, they apply only to around 10% of advanced lung cancer patients. Another 40% or so have PD-L1 positive tumors (1% or greater expression), while about half have PD-L1 negative tumors (less than 1% expression).

But another presentation showed that people with the lowest PD-L1 levels can benefit too. Researchers described findings from a combined analysis of advanced NSCLC patients with PD-L1 negative tumors in three first-line treatment trials: KEYNOTE-189, KEYNOTE-407 and KEYNOTE-021.

As reported last year, KEYNOTE-189 showed that people with nonsquamous NSCLC who were randomly assigned to receive Keytruda plus Alimta (pemetrexed) and platinum chemotherapy saw their risk of death reduced by about half compared with those who received chemotherapy alone. While participants with the highest PD-L1 levels saw the greatest benefit, those with the lowest levels also showed improved survival. KEYNOTE-407 showed that Keytruda plus Abraxane (nab-paclitaxel) chemotherapy improved survival in people with squamous NSCLC, again across PD-L1 levels.

The pooled analysis presented at WCLC included 428 participants with previously untreated squamous or nonsquamous lung cancer without PD-L1 expression. Keytruda plus chemotherapy led to a 44% reduction in the risk of death compared with chemotherapy alone. The median overall survival duration was 19.0 months for Keytruda recipients versus 11.0 months for those who used only chemotherapy.

After five years of follow-up, 13% of Opdivo recipients were still alive, compared with just 3% of chemotherapy recipients. Among participants who showed an objective response to Opdivo or chemotherapy, five-year overall survival rates were 32% and 0%, respectively. The median duration of response was 19.9 months with Opdivo versus 5.6 months with docetaxel. The Opdivo survival advantage was seen across patient subgroups, including those with PD-L1 negative tumors.

“CheckMate 017 and 057 are the first Phase III trials to report five-year outcomes for a PD-1 inhibitor in previously treated advanced NSCLC, demonstrating a greater than five-fold increase in five-year OS rates with nivolumab (13.4%) compared with docetaxel (2.6%),” Gettinger said in an IASLC press release.

Discussing these findings at a WCLCL press briefing, Reck said that immunotherapy “has completely changed the management of lung cancer,” turning it into “a chronic disease with good quality of life” for some individuals.

Still, he was reluctant to use the word cure. Although five-year progression-free survival has traditionally been considered a cure, he noted that even at that point, biopsies sometimes reveal a viable tumor. “I would say we are controlling the tumor,” he concluded, suggesting that these people probably need ongoing active treatment or surveillance.