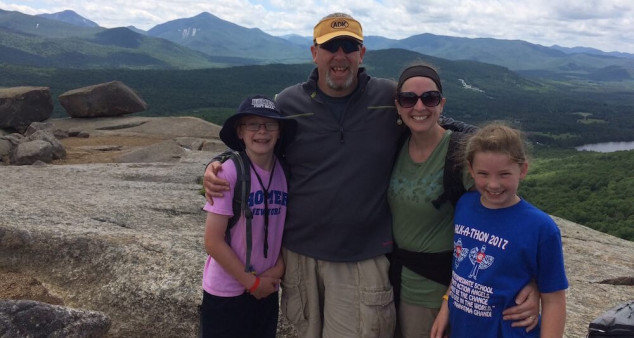 When genetic testing revealed they both had a rare condition that predisposes a person to colon cancer, Pat Quinn had to be brave for his son, Lukas

Pat Quinn and his son, Lukas, have a lot in common. They’re both die-hard sports fans, devoted to the New York Giants and Syracuse Orange. They’re both kind, loving people known for giving great hugs.

And when genetic testing revealed they both had juvenile polyposis syndrome (JPS)—a rare condition that predisposes a person to colon cancer—Pat modeled for his son how to brave the initial challenges of a colectomy, while continuing to live life to its fullest.

Pat had dealt with colon issues since he was a teenager. Every couple of years he’d get a colonoscopy, and the doctor would extract and snare a significant number of polyps each time.

Even though his physician never put a name to Pat’s condition, nor raised any cause for alarm, Pat worried about his health. His concerns were amplified after his mother required a bowel resection and his older sister was diagnosed with stage III colon cancer.

“I felt something bad was going to happen; it was just a matter of time,” he says.

But misfortune first befell not Pat, but his son, Lukas. At age seven, he started suffering severe gastrointestinal issues. A colonoscopy identified and removed hundreds of benign polyps, and a year later, a follow-up exam revealed even more polyps lining Lukas’ colon.

Doctors could offer no clear diagnosis, so in early 2014, the Quinn family drove the six hours from their home in Central New York to Boston, to consult with pediatric gastroenterologist Victor Fox, MD, at Boston Children’s Hospital.

After diagnosing Lukas with JPS—a genetic condition—Fox suggested the family undergo a genetic study and requested all of Pat’s family medical records. The study revealed the genetic trait came from Pat, who was also diagnosed with JPS.

“Dr. Fox sat us down and said, ‘Pat, right now I am more concerned about you than Lukas,’” recalls Juli, Pat’s wife.

Fox sent Pat’s report over to Sapna Syngal, MD, Director of the Gastrointestinal Cancer Genetics and Prevention Clinics at Dana-Farber Cancer Institute, for consultation. “Diagnosing a genetic cancer predisposition in one person leads to improvement in the care for the rest of the family,” Syngal explains.

Pat was not prepared for the news that awaited him. Syngal and Dana-Farber surgical oncologist and colorectal surgeon Joel Goldberg, MD, who conducted another colonoscopy, explained that Pat’s polyps had been pre-cancerous for the past eight years and that he was at very high risk of colon cancer. Goldberg was imperative that Pat’s colon needed to be removed.

“We were blown away; we had no idea Pat had this ticking time bomb inside of him,” Juli says.

Goldberg explained the colectomy procedure. After the colon was removed, Goldberg would extend Pat’s small intestine to create a “J-Pouch” to replace the function of his colon and rectum. Pat would need to use an ileostomy bag for a few months to collect his waste while the J-Pouch healed. However, before they could proceed, Goldberg wanted Pat to lose 40 pounds — otherwise there was a risk that the small intestine would not reach, and Pat would then need a permanent ileostomy bag.

Never one to shy from a challenge, Pat adopted a rigorous diet and exercise regimen and shed 54 pounds in three months. “I wanted to be as physically healthy as possible going into the surgery,” he says.

But as fit as he felt, he wasn’t quite mentally prepared. When he met with the ileostomy department at Dana-Farber and saw the ileostomy bag, he broke down.

“Sometimes you get whammed when you realize what is going on in your life,” he says. “Dr. Goldberg reassured Juli and I that I would be OK. It would be a challenge, but we would get through it.”

When Pat woke up from surgery in February 2015, he felt on his abdomen for the ileostomy bag—and breathed a sigh of relief. It was on his right side, which meant it was only temporary. Pat’s hard work to lose the weight had been successful, and the J-pouch plan would proceed as planned.

Still, it was a rough few months. Pat developed pancreatitis, which kept him hospitalized longer than planned. Once he got home, he felt weak and tired. But he met his challenges head-on.

“I really wanted to go swimming to exercise,” he recalls. “So I fashioned this band around my waist to hold my bag, and I wore a shirt over it. I swam for an hour; it felt great. I realized, ‘If this is how I have to live, I can do this.’”

After his reconnection surgery in June, Pat adapted to his new norm. He experimented with his diet and indigestion aids and exercise regimen to find the perfect balance, switching up his swimming with some biking as well.

“I kept thinking, I need to stay fit in case I have any other challenges ahead,” he says.

In September 2016, Pat joined Juli and some friends and competed in a sprint triathlon—a proud triumph just 18 months after his surgery.

That victory took on greater significance just one month later, when Pat and Juli had to rush Lukas to the emergency room at Boston Children’s Hospital. The diagnosis was clear: Lukas needed a colectomy, too. It was hard to hear, but Pat set an example that his son could follow.

“Lukas knew that Daddy had gotten better after his surgery and had competed in a sprint triathlon,” Juli says. “That knowledge helped him in his recovery.”

Today, Pat remains Lukas’ steadfast cheerleader. The two continue to tackle mountains together—literally. In the summer of 2017, the entire Quinn family summitted Cascade Mountain, one of the 46 high peaks of the Adirondacks.

This article was originally published on May 29, 2018, by Dana-Farber Cancer Institute. It is republished with permission.

Cigarette Smoking Can Increase the Risk of Colon Cancer