Women who’ve had breast cancer surgery were once told not to exercise strenuously to avoid lymphedema. That was the opposite of the truth.

Twice a week last summer, on Tuesday and Saturday evenings, some 40 women congregated on the banks of the Anacostia River in Maryland, near the nation’s capital, life jackets buckled around their waists and paddles in their hands. Some were in their early 30s, others in their late 70s; some have the toned physiques of personal trainers, others not so much. But the women of GoPink!DC share two life experiences: They have all survived breast cancer and taken up the ancient Chinese sport of dragon boat racing. 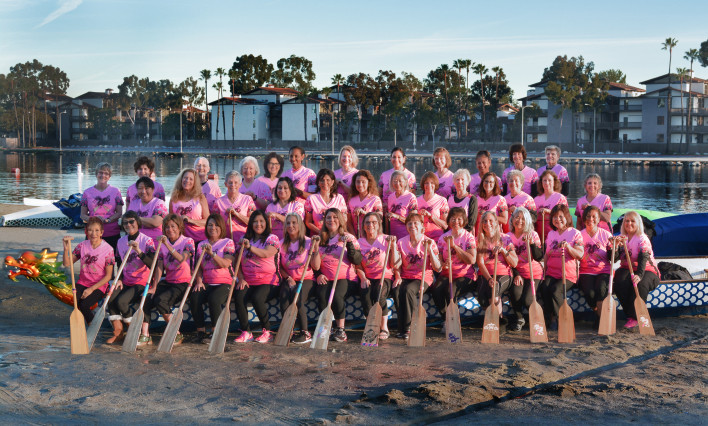 These women are far from alone. Dragon boat racing has become an international movement for breast cancer survivors. Paddling has become a cornerstone of their lives.

But it’s more than a way to celebrate life as a survivor. The rigorous sport is also helping them avoid one of the most difficult complications of breast cancer: lymphedema, the painful swelling that can occur after the surgical removal of lymph nodes. Dragon boat racing, it turns out, played a key role in upending a pervasive myth that women at risk for lymphedema should avoid certain kinds of exercise. It turned out that the exact opposite was true. It’s believed that the intense upper-body exercise entailed in this sport decreases lymphedema risk.

The story begins in 1995. Don McKenzie, a sports medicine specialist at the University of British Columbia, recommended upper-body exercises to a woman who had recently undergone chemotherapy for breast cancer. “Oh, no. You don’t understand,” she told him. “I’m not allowed to do those because I’ve had breast cancer.” McKenzie was taken aback by this justification: He’d never heard of any such rule.

Unbeknownst to him, however, banning upper-body exercise for breast cancer survivors had been standard since the early 20th century, when oncologists first hypothesized that an increase in blood flow to the extremities—of the sort stimulated by exercise—could cause lymphedema. The hypothesis was widely accepted by the medical community, despite a lack of clinical evidence. To this day, many women are told to avoid even such basic household chores as raking leaves and even cutting vegetables, advice that can undercut their quality of life.

To McKenzie, that advice “really did not pass the test of common sense,” so he began a three-year journey to debunk it. An avid canoer, his first thought was to establish a canoeing team for women who had survived breast cancer. But canoes are notoriously tippy, and he decided he didn’t want any of his subjects, perhaps weakened by surgery, chemotherapy or radiation, ending up in the water.

In his quest to find a suitable alternative, McKenzie stumbled upon the obscure sport of dragon boat racing. It was physically strenuous, requiring repetitive upper-body movement, the epitome of what women who have survived breast cancer were not “supposed” to do. By February 1996, with financial support from the Canadian Institutes of Health Research, he enrolled 24 survivors into a team cheekily named Abreast in a Boat. They completed a multi-month strength-training program before taking to the water. The results, published a little over a year and a half later in the Canadian Medical Association Journal, were remarkable in their unremarkableness: Not a single team member developed lymphedema during or after the project.

More than 20 years later, what originated as a scientific experiment has evolved into a full-blown medical movement. At last count, there were 225 breast cancer survivor dragon boat racing (BCSDBR) communities scattered across 25 countries in Africa, Asia, Europe, North America, South America and Australia. “Participating in dragon boating gives survivors a sense that life is not over after a cancer diagnosis, that a survivor can live a vibrant, active, healthy life,” says Kathy Pecka, media coordinator for GoPink!DC.

Halfway across the world, Meri Gibson echoed those sentiments in a phone call. She puts in some four hours a day as a volunteer for the New Zealand chapter of the International Breast Cancer Paddlers’ Commission (IBCPC), a nonprofit established in 2007 to develop regular competitive programming for dragon boat racing teams. (More than 120 teams and their supporters, or around 4,000 people, attended last year’s race in Florence, Italy.)

Gibson was slow to warm to the movement at first. She was diagnosed in 1999 and had a mastectomy. She didn’t want to hang around with “people who talked about cancer,” she recalls. But in November 2006, at a funeral, she saw a group of women and wondered, Who are those women, and why are they wearing those pink boas? “Oh, they are breast cancer dragon boaters,” she was told. She gave dragon boating a try and really liked it. The following year, her team won a gold medal at the national championship race. She was hooked and went on to found the Aoraki Dragon Boat Association on New Zealand’s South Island, chair the New Zealand Dragon Boat Association and serve as the president of IBCPC, all while juggling a full-time job as a management consultant. This past August, she flew to Thailand to compete in the International Dragon Boat Federation’s 14th annual world championships.

More than 20 years after her operation, Gibson, now 63, is lymphedema-free—a “lucky” break she attributes to her paddling. Recent research backs that up. Breast cancer survivors involved in the dragon boating movement have a lower incidence of lymphedema than breast cancer survivors who don’t get regular upper-body exercise. In 2014, a team of Italian researchers found that regular paddling was associated with a decrease in oxidative stress levels, which is associated with a reduced risk of postsurgical lymphedema. McKenzie wouldn’t have been surprised. In his original report, he wrote, “There are many reasons to believe that upper-body exercise has a role in recovery from breast cancer and lymphedema because it can improve range of motion and reverse muscle atrophy, activate skeletal muscle (which may help pump lymph), stimulate the immune system and reset the sympathetic tone of the lymphatic vessels.”

The benefits go much further. One study of breast cancer survivor dragon boat racing concluded that it improves “health-related quality of life,” including “physical, functional, emotional and spiritual well-being, breast cancer-specific concerns and cancer-related fatigue.” These days, physical exercise is a mainstream complementary therapy for cancer survivors—and it’s backed by evidence. Dragon boaters played a not insignificant role in that remarkable transformation.

Kathy Pecka and other dragon boat paddlers are glad to be part of a scientific movement that put exercise back at the forefront of breast cancer survival. But she is more moved by the psychological and social benefits of paddling. “Mentally, being part of this team has helped many of us develop stronger psychological resilience, especially if faced with cancer a second time. Tackling something as challenging as dragon boating is a confidence booster in all aspects of life. Dragon boating has improved all of our lives, from those who have learned the joys of athletic activity for the first time to those who have added this sport to their athletic interests.”

As Gibson says, “I always tell people, ‘Sure, we could paddle this boat on our own, but we are much bigger and much stronger together.”

Which, of course, is an apt metaphor for breast cancer survival itself.

To learn more about other lymphedema myths, click here.

To learn more about breast cancer and exercise, click here.