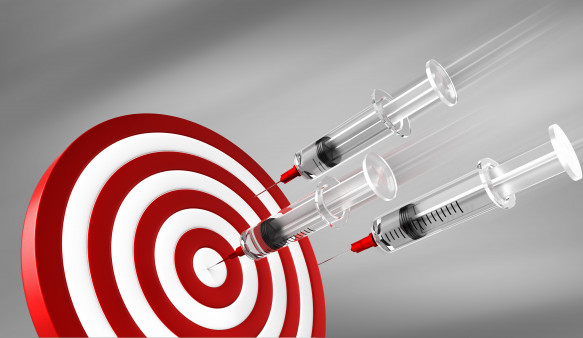 A bispecific antibody that targets both HER2 and HER3 produced promising responses in a small number of people with metastatic pancreatic cancer and non-small cell lung cancer (NSCLC) with fusions in the NRG1 gene, according to a report at the recent International Conference on Molecular Targets and Cancer Therapeutics, jointly sponsored by the American Association for Cancer Research (AACR), the National Cancer Institute and the European Organization for Research and Treatment of Cancer.

The experimental therapy from the Dutch company Merus, dubbed zenocutuzumab (MCLA-128), is one of several drugs being developed as site-agnostic or pancancer therapies that fight cancer with specific genetic changes regardless of where they arise in the body. Besides NRG1, other pancancer targets include mutations or fusions in the TRK, RET and KRAS genes.

The NRG1 (neuregulin-1) gene makes a protein that plays a role in signaling pathways that regulate cell growth. When this gene fuses with another gene, it can lead to cancer cells growing out of control. NRG1 alterations are rare, occurring in less than 1% of all solid tumors and an estimated 3% of NSCLC.

“NRG1 fusions have recently been described in several cancer types and are enriched in diseases in desperate need of better therapy, including pancreatic and lung cancer,” said Alison Schram, MD, of Memorial Sloan Kettering Cancer Center in New York, who presented the findings at the conference. “Identifying a new, effective treatment strategy for these patients could make a big impact in their lives.”

NRG1 gene fusion proteins bind to HER3 (human epidermal growth factor receptor 3), triggering a cascade of cell signals that promote tumor growth. Zenocutuzumab is a bispecific antibody, meaning it has two different targets. It both blocks the binding of the fusion proteins to HER3 and the interaction between HER3 and HER2, which plays a critical role in cell proliferation.

The researchers next performed genetic sequencing of tumors in patients, identifying 29 individuals with tumors that tested positive for NRG1 fusions, including pancreatic, lung, breast, prostate and gallbladder cancer, sarcoma and lymphoma.

Three Memorial Sloan Kettering patients with chemotherapy-resistant advanced cancer were treated with zenocutuzumab given by IV infusion every other week as part of an expanded access program that requires individual approval by the Food and Drug Administration.

All three experienced significant tumor shrinkage, and all remain on treatment, Schram reported.

One 52-year-old man with advanced pancreatic cancer that had spread to his liver had a dramatic drop in a tumor biomarker (CA 19-9), and scans showed that his tumor diameter shrank by 54% at five months—considered a partial response according to the most commonly used criteria. What’s more, his fatigue improved, and he started to gain back lost weight.

Another patient, age 34, with advanced pancreatic cancer with liver metastasis also saw a steep biomarker decline and a 25% decrease in pancreas tumor diameter, and the cancer in his liver appeared to stabilize. He reported a rapid reduction in abdominal pain following treatment.

A third individual with extensively treated NSCLC that had spread to his brain saw a 41% reduction in tumor size at five months and an improvement in brain metastases, according to Schram.

“It is important to note that the patients felt remarkably well on treatment and reported immediate improvement in quality of life,” Schram said in an AACR press release.

In another press release, Merus added that one other patient with pancreatic cancer in the expanded access program had died of the cancer. Among five NSCLC patients treated so far in the Phase I/II eNRGy clinical trial, one had stable disease for more than seven months but dropped out due to poor adherence unrelated to side effects, two had progressive disease and two have recently started treatment and have not yet been evaluated.

Merus also reported early results from a Phase II trial of zenocutuzumab plus trastuzumab (Herceptin or generics), with or without chemotherapy, in people with metastatic breast cancer. Confirmed overall response rates were low (4% and 0% in two cohorts), but the breast cancer patients were not tested and selected for NRG1 fusions, which were determined to be the drug’s key target after that trial was already under way.

Zenocutuzumab appears safe and well tolerated based on early findings. Among 117 participants who have received various dosing regimens of the drug in trials, about 4% of participants had severe (Grade 3) adverse events suspected of being related to the therapy, and one died of a hypersensitivity reaction. No notable increases in heart toxicity, gastrointestinal problems or skin rash were observed—side effects that can limit treatment with other targeted therapies.

As with other pancancer therapies, these findings underline the importance of tumor genetic testing to see whether patients carry any of these uncommon but potentially targetable mutations.

“Initial data from these three patients suggests that it is important to look for NRG1 fusions in tumors, particularly in KRAS-negative pancreatic cancer and invasive mucinous adenocarcinoma of the lung, and when identified, patients should consider treatment in a clinical trial targeting this alteration,” Schram said.