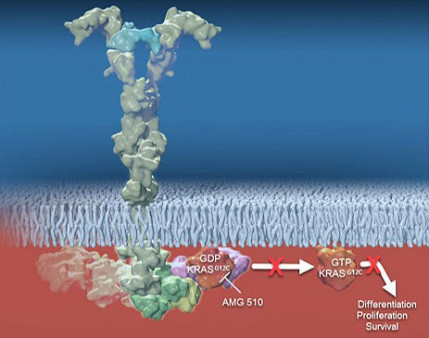 AMG 510 shrank tumors in half of lung cancer patients with a mutation thought to be “undruggable.”

An experimental therapy designed to target mutated KRAS proteins showed good activity in a small Phase I study of people with lung cancer, colon cancer and other solid tumors, researchers reported this week at the American Society of Clinical Oncology (ASCO) annual meeting in Chicago.

If these results are confirmed in larger trials, this could be good news for patients because KRAS mutations occur more frequently in lung tumors than other mutations—such as ALK, BRAF and EGFR—targeted by existing drugs. Likewise, only a small proportion of colorectal cancer is targetable by existing medications.

Researchers have identified several so-called driver mutations that contribute to the development of cancer. Mutations involving KRAS, a signaling protein that regulates cell multiplication, are the most common genetic variations in lung cancer. But to date, no medications have been able to successfully target these mutations.

“KRAS has been a target of active exploration in cancer research since it was identified as one of the first oncogenes more than 30 years ago, but it remained undruggable due to a lack of traditional small molecule binding pockets on the protein,” David Reese, MD, executive vice president of research and development at Amgen, said in a company press release. “AMG 510 seeks to crack the KRAS code by exploiting a previously hidden groove on the protein surface.”

Marwan Fakih, MD, of City of Hope in Duarte, California, presented early findings from a small study of AMG 510, an experimental drug from Amgen that targets a particular KRAS mutation known as KRASG12C. This variation is found in 13% of lung cancers, 3% of colorectal cancers and around 2% of other solid tumors, he estimated.

This first human study enrolled 35 people with locally advanced or metastatic solid tumors carrying the targeted mutation; 14 had non-small-cell lung cancer, 19 had colorectal cancer and two had cancer of the appendix. People with cancer that had spread to the brain were excluded. All had previously tried two or more prior lines of treatment.

All participants in this open-label (nonrandomized) study were treated with AMG 510 at doses of 180, 360, 720 or 960 milligrams, taken by mouth once daily until they experienced disease progression or unacceptable side effects.

The analysis presented at ASCO included 10 evaluable participants with lung cancer. Of these, five (50%) experienced partial tumor shrinkage and four had stable disease without further progression. All of the responders remain on treatment. One of the partial responders went on to have a complete response with longer follow-up, according to Amgen.

Fakih reported that one 61-year-old woman who had previously tried chemotherapy, radiation and a checkpoint inhibitor saw a 34% reduction in tumor size, while a 59-year-old man who had tried multiple prior lines of treatment had a 67% reduction.

In addition, 13 of the 18 evaluable patients with colorectal cancer and one person with appendix cancer had stable disease and most are still on treatment. Fakih reported that a 34-year-old woman who received four prior lines of chemotherapy had an 18% reduction in tumor size (considered stable disease because it did not reach the 30% threshold for partial response).

Treatment was generally safe and well tolerated. The most common side effects were diarrhea, decreased appetite and nausea, mostly mild. No serious treatment-related adverse events were reported and no disease-limiting toxicities were observed, according to Fakih. Nine people stopped treatment, mostly because of disease progression.

“While there’s been significant progress in treating solid tumor cancers overall with targeted therapies, patients with the KRASG12C mutation have not benefited from these advances,” Fakih said in the press release. “In this early Phase I trial, investigational AMG 510 showed encouraging antitumor activity. We look forward to further investigating AMG 510 with the goal of closing the treatment gap for patients with this type of mutation.”

This study (trial number NCT03600883), which also includes a Phase II portion, is ongoing and is currently recruiting participants at 15 sites across the United States as well as several international centers. Amgen is also planning a trial of AMG 510 in combination with checkpoint inhibitors.