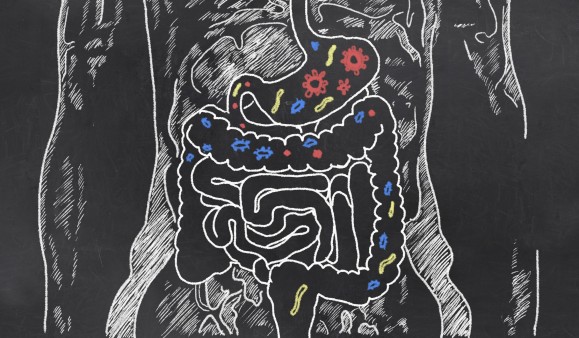 Certain types of bacteria were associated with greater disease progression while others were linked to improved survival.

The composition of bacteria in the digestive tract may affect how well immunotherapy for cancer treatment works, according to two studies recently published in Science magazine.

One study found that people with more diverse gut bacteria responded better to PD-1 checkpoint blockers for treatment of advanced melanoma. The other showed that certain types of bacteria influenced the effectiveness of these drugs for epithelial tumors.

In recent years, a growing body of research has shown that intestinal bacteria, known as the gut microbiome, play a role in many health conditions ranging from cardiovascular disease to HIV infection. They may also affect the likelihood of developing cancer and how well treatment will work.

Rather than attacking cancer directly, like traditional chemotherapy, immunotherapy helps the immune system recognize and fight cancer cells. PD-1 checkpoint inhibitors are monoclonal antibodies that block the PD-1 receptor on T cells, the main soldiers of the immune system. Some tumors can use PD-1 to turn off immune responses against them. Drugs that block PD-1 can release the brakes and restore T-cell activity against cancer cells.

But the approved PD-1 checkpoint inhibitors, Keytruda (pembrolizumab) and Opdivo (nivolumab), work only for a subset of patients, and response is sometimes temporary. Researchers do not fully understand why this is the case or how to predict who will benefit.

In the first study, Vancheswaran Gopalakrishnan, PhD, of the University of Texas MD Anderson Cancer, and colleagues used genetic sequencing to assess bacteria in oral fluid and fecal samples from patients with metastatic melanoma who were treated with PD-1 immunotherapy.

The researchers saw significant differences (meaning they were probably not attributable to chance) in the composition and diversity of bacteria in fecal samples from people who responded to the treatment compared with those who did not. There were no notable differences in oral samples.

Analysis of fecal samples showed that the responders had more bacteria from the Ruminococcaceae family, while nonresponders had more Bacteroidales bacteria. Having more Ruminococcaceae was associated with higher levels of circulating killer T cells, better T-cell penetration into tumors and longer progression-free survival. In contrast, having more Bacteroidales was linked to higher levels of immune suppressor cells and faster disease progression.

In the second study, Bertrand Routy, MD, of Gustave Roussy Cancer Center near Paris, and colleagues also looked at the association between PD-1 checkpoint inhibitor response and gut bacteria populations in people with advanced bladder, kidney or lung cancer.

They found that patients who used antibiotics during treatment—which can kill off both good and bad bacteria in the gut—did not respond as well to PD-1 inhibitors and had more disease progression and shorter survival. This suggests that people taking PD-1 blockers should be cautious about using unnecessary antibiotics.

Stool analysis showed that responding patients had higher levels of the bacteria Akkermansia muciniphila. Here, too, checkpoint blockers had a stronger antitumor effect in mice that received fecal transplants from responders compared with nonresponders. But oral supplements of these bacteria restored the effectiveness of PD-1 blockers in mice that received feces from nonresponders, causing more T cells to be recruited to tumors.

“You can change your microbiome, it’s really not that difficult, so we think these findings open up huge new opportunities,” Jennifer Wargo, MD, lead author of the melanoma study, said in an MD Anderson Cancer Center press release. “Our studies in patients and subsequent mouse research really drive home that our gut microbiomes modulate both systemic and antitumor immunity.”

Researchers are now developing a clinical trial that will evaluate therapies to change the gut microbiome in people taking PD-1 checkpoint blockers. Bacterial composition may be modified by diet, use of antibiotics or probiotics, or fecal transplants from individuals with healthy bacteria.