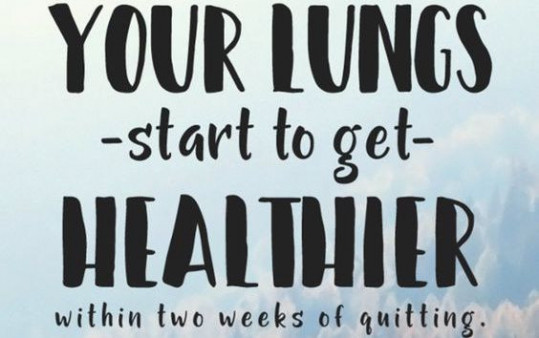 November 15 is the annual Great American Smokeout. Courtesy of Smokefree.gov

There Is Hope for a Future With Less Lung Cancer

This month, we raise awareness about what lung cancer is, how to lower your risk, and how important screening is for those at high risk.

November 15, 2018 • By Centers for Disease Control and Prevention

November is Lung Cancer Awareness Month. During this observance, we raise awareness about what lung cancer is, how you get cancer, how to lower your risk, and how important screening is for those at high risk. It’s also a time to acknowledge and support survivors.

Lung cancer happens when cells in the body grow out of control, starting in the lungs. Lung cancer may spread to lymph nodes or other parts of the body. Learn about the different types of lung cancer.

There is further hope for a future with less lung cancer because we know that early detection works. If lung cancer is found early, there are more options for treatment. The U.S. Preventive Services Task Force recommends yearly lung cancer screening with a low-dose CT scan for people who—

Heavy smoking means a smoking history of 30 pack years or more. A pack year is smoking an average of one pack of cigarettes per day for one year. Talk with your doctor to see if screening is right for you.

This November, as we raise awareness about lung cancer, we also proclaim the progress that has been made that gives us hope for the future.

This article was originally published on November 6, 2018, by the Centers for Disease Control and Prevention. It is republished with permission.