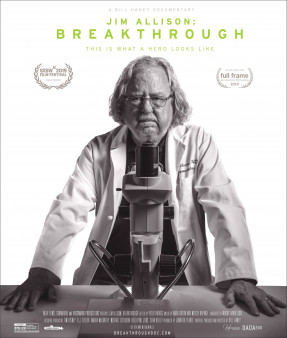 It’s not easy to make an edge-of-your-seat film about scientific advances. But the new docu­mentary Jim Allison: Breakthrough does a pretty amazing job. It chronicles the pioneering researcher whose work helped create checkpoint inhibitor immunotherapy, which unleashes the immune system against cancer, and won him a Nobel prize, shared with Tasuku Honjo, MD, PhD, in 2018.

The film shows Allison, white hair framing his craggy face, sipping whiskey and playing blues harmonica. No scientist stereotype, he goes his own way, ignoring ideas that don’t make sense to him. In 1987, French researchers discovered CTLA-4, a receptor on T cells. At the time, everyone thought the receptor turned on immune function. But to Allison, that just didn’t add up. He ignored the published literature and discovered that CTLA-4 wasn’t a pedal—it was a brake. The insight helped open the door to checkpoint inhibitor immunology—although it took many more years of struggle to overcome scientific, commercial and bureaucratic obstacles.

Along the way, we watch Sharon Belvin, diagnosed with metastatic melanoma at age 22, as every treatment fails her until an experimental drug based on Allison’s work saves her life.

The movie, directed by Bill Haney and narrated by Woody Harrelson, can’t tell the story of all the scientists involved in the immunotherapy revolution. It also implies that this is “the” cure—and it is, but only for a minority of people with cancer.

Still, by the time Allison—who lost his mother to lymphoma, his brother to prostate cancer and who now has prostate cancer himself—plays harmonica onstage with Willie Nelson, the movie feels like a human triumph. It’s now in limited theatrical release (Breakthroughdoc.com) and available for streaming on Apple TV as well as Amazon Prime, Vimeo, Google Play, VUDU, and it’s also on DVD.