Heidi Yates and her family Courtesy of Heidi Yates

A registered dietitian with a passion for exercise, Heidi Yates, 40, lives with her family in Memphis. She has chronic lymphocytic leukemia.

Although I lived in Memphis, I ran a Pure Barre franchise—it’s exercise inspired by a ballet barre—in St. Louis, teaching two to three days a week. It’s an eight-hour round trip. My husband and I have a young son.

I found new bumps above my collarbone, so I asked my nurse practitioner friend at Pure Barre to look. She felt them and told me to see my primary care provider, who sent me to an ear, nose and throat specialist who gave me antibiotics and took an ultrasound. He wanted to do another one in six weeks. 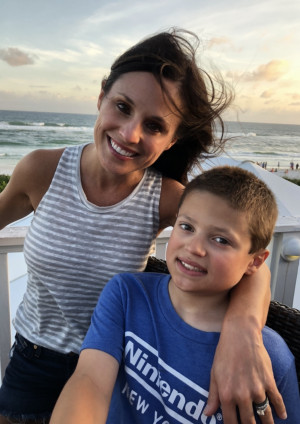 Heidi Yates with her son JacksonCourtesy of Heidi Yates

After the second ultrasound, the doctor called me and said I had abnormally large lymph nodes “too numerous to count” and advised a needle biopsy. He wanted me to do it the next day. I met him and had it done and told him I was busy, so he should call with the results.

He called the next day. I was driving with 8-year-old Jackson to meet my husband for dinner. “I don’t have good news for you,” he said. I was thinking, Don’t wreck the car. I have this kid getting ready to order French fries. I was fighting back tears. All I heard was, “The good news is, if you get leukemia, this is the best one you can get.” He recommended that I see a colleague, a Memphis hematologist.

The hematologist told me he thought I’d had this for several years. I had another CT scan and a bone marrow biopsy—hope I never have to do that again!

While waiting for the results, my husband and I booked a last-minute flight to New Orleans for a long weekend. We needed some time together to discuss all our fears and hopes and lose our minds a little in good music on Frenchmen Street, amazing food in the French Quarter and bars that serve wine at all hours.

When we got back, I found out that there were more enlarged lymph nodes on my abdomen, my white blood cells were elevated and 30% of my bone marrow was affected with chronic lymphocytic leukemia (CLL). I asked, “Should I get a second opinion?” He said, “No, we’ll do six months of chemotherapy first.” He wanted me to begin chemo that day, which I did.

I have a friend who’s an ob-gyn, and this didn’t sit well with her. She told me to get a second opinion. A couple of weeks later, we flew to MD Anderson Cancer Center in Houston to meet with a CLL specialist.

The CLL specialist told me he hasn’t used the kind of chemo I started on in over a decade, that it could do more harm than good—my condition could progress to a more aggressive blood cancer. I had just done two days of chemo. I stopped it.

He recommended either a watch-and-wait period with blood tests every three months or a new non-chemotherapy targeted treatment approved by the Food and Drug Administration (FDA)—a daily BTK kinase inhibitor tablet that blocks a protein that plays a role in the immune system’s B cells involved in CLL. I took a mutation test to see if I was a good candidate. It failed, possibly because the chemo had knocked out the leukemia cells. I planned to retake it in a few weeks. For the time being, it was watch and wait.

I found a CLL Facebook page. Social media can drive you crazy, but it’s so good to find people who are able to help each other. 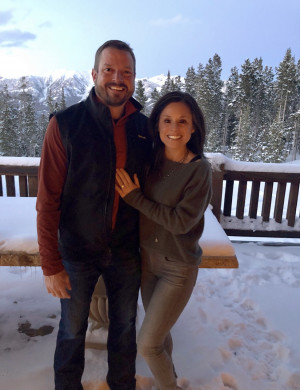 I had a wonderful summer. We had a couple of vacations, including in the beautiful state of Montana. I got my test results back—they looked really good. He used the word remission! Still couldn’t do mutational status to see if I was eligible for the new drug. I would come back in November. He told me to rest, that keeping work/life/all things in balance, not being stressed out, would help keep the CLL in remission longer. I’m used to running 90 miles an hour, but started to work on calming down.

My blood work still looked good, but I felt like there was a dark cloud following me, like “Here I am. I will make you feel bad. You just wait.” I guess those thoughts and fears are what I have to learn to live with as someone with chronic cancer.

The CLL seemed stable. The nurse practitioner told me, “Now is the time to enjoy life!” To deal with my emotions, I started to take an anti-anxiety, antidepressant medication.

While enjoying remission, including skiing in Big Sky, Montana, I found swollen lymph nodes in my neck. I had had several sinus infections over the previous few months, so my doctors and I truly hoped it was because of that.

I had a hard, hard, not-fair day at MD Anderson. I had larger than normal lymph nodes in my neck, underarms, abdomen and groin. I now had active CLL. I’m usually a strong person, but I cried it all out on the streets of Houston.

I qualified for a research study, but my insurance wouldn’t cover the blood work, CT scan, bone marrow biopsies or drugs. One of the drugs—the kinase inhibitor—costs $13,000 a month, and in this study, you receive it for five years free! We appealed. Denied. But they did approve the drug outside of the trial, so it would be covered by my insurance, and then I qualified for a special co-pay program, so I got the drug at an extremely discounted rate. I started on June 22.

I noticed a significant decrease in the size of all my lymph nodes. I felt such relief. I got to spend a fun evening in Houston after my appointment with a girlfriend, doing what I do best: eating amazing food, shopping till we drop, Pure Barre–ing and imbibing a plethora of wine!

The. Meds. Were. Working. Still, this medication sometimes stops working for CLL patients. It’s my dark cloud that follows me. When would it stop working?

Yet, I felt better than ever.

I had my blood work and follow up. I had some side effects. I got dehydrated and thirsty even if I was drinking plenty of water. I had bothersome and constant acne. My doctor recommended that I reduce the dose. He was confident this wouldn’t mean the CLL would become aggressive again. I reduced the dose.

This second opinion, at a world-renowned cancer research center, changed my life. No more unnecessary chemo, yet I gained an amazing non-chemo drug that is keeping my CLL controlled.

I had a great day. All my labs were great. My CLL was very well controlled. I saw my doctor again in January. I am so grateful for my friends who travel to Houston with me and for my wonderful husband, Jack, who often has to hold down the fort at home.

I had Lasik surgery, so I stopped my CLL drugs for four days before, three days afterward. Three days after surgery, I woke up at 3 a.m. with very painful, very swollen lymph nodes all over my neck, collarbone, underarms, groin, etc. I woke my husband up. I was so very scared. Turns out, I’m someone who can’t abruptly stop my meds. I continued my normal dose, and the nodes went back to normal.

I had been on this drug for two years, and it was extremely hard on my hair, skin and nails and to maintain adequate hydration. I had a hard time fighting off some infections. My doctor wanted me to stop treatment for a while, give my body a rest. So it was watch and wait again. But two weeks later, I had node swelling—five pounds’ worth! The scariest part was the pain. So I restarted my medication, and the nodes started going down.

A new drug was approved by the FDA—it’s in the same class but is reported to have fewer side effects. We decided to give it a try.

I flew to Houston during a worldwide pandemic (my April visit had been canceled). I’d been having some side effect issues on the new drug. My CLL lab work was perfection. We reduced the dose of the new drug to see if that meant fewer side effects.

If you have chronic cancer, I have some advice: You really do have a moment to do all your research. Take the long flight. I promise you’ll have no regrets. If you are debating a second opinion, please think on it no more—find a doctor who is really connected to the research. Doing so changed my life. And find a network, a support group. My husband is my best friend, but neither he nor my friends know what it is like to carry this load. Finally, stay vigilant, know your body, listen to your body.