Many people first heard about messenger RNA (mRNA) when it was used to create highly effective COVID-19 vaccines in 2020. But the technology is hardly new, having been tweaked and optimized by multiple research teams over the past few decades.

It refers to a method for giving cells the instructions to make specific proteins (see “What Is mRNA?” below). As such, mRNA might help prevent infections ranging from influenza to HIV and treat diseases as diverse as heart disease and multiple sclerosis. But tackling cancer won’t be as easy as taming a respiratory virus.

Indeed, BioNTech cofounders Ugur Sahin, MD, PhD, and Özlem Türeci, MD, PhD, a husband-and-wife team who met when they were in training as oncologists, have been working on mRNA technology for cancer immunotherapy for more than 20 years. While BioNTech is best known for its successful COVID vaccine (developed in partnership with Pfizer), Sahin told STAT News, “We don’t consider ourselves a messenger RNA company. We consider ourselves an immunotherapy company.”

The main application of mRNA technology in oncology is cancer vaccines, which aim to teach the immune system to recognize and attack malignant cells. BioNTech and Moderna, the other COVID vaccine powerhouse, have a pipeline of candidates, as do the German biopharmaceutical company CureVac and several smaller start-ups. 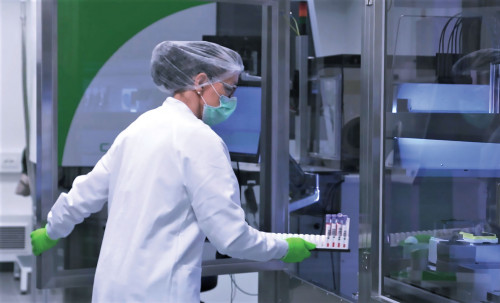 Early studies of mRNA vaccines for cancer led to a mix of successes and setbacks. Some good early results involved so-called hot tumors, like melanoma, that have many mutations and attract T cells. BioNTech’s promising melanoma vaccine (BNT111), for example, has advanced to Phase II trials. But researchers hope to treat a broader range of cancers, known as cold tumors, that do not respond as well to immunotherapy. Fortunately, an influx of funding for COVID vaccines has given mRNA cancer research a shot in the arm.

One challenge to overcome with cancer vaccines is that, unlike viruses, malignant cells arise from normal human cells, so they may not look “foreign” enough to arouse the immune system.

A key advance in immunotherapy has been the advent of PD-1 checkpoint inhibitors, monoclonal antibodies that block immune-dampening proteins on T cells. Some tumors can hijack these receptors to turn off T-cell activity; checkpoint inhibitors release the brakes. But these drugs don’t work for everyone, and they are less effective against cold tumors that don’t easily attract T cells. Combining checkpoint blockers with mRNA vaccines could have the effect of letting up on the brakes and stepping on the accelerator at the same time.

Some mRNA vaccine candidates contain the code for shared cancer antigens that are frequently expressed on particular types of tumors. Researchers at Duke University, for example, are working on an mRNA vaccine that targets mutations that commonly arise in people with HER2-positive advanced breast cancer. But personalized vaccines that target neoantigens—unique antigens that arise as cancer cells mutate—may hold more promise.

Vinod Balachandran, MD, of Memorial Sloan Kettering Cancer Center (MSKCC) in New York City, and colleagues are working on personalized mRNA vaccines for hard-to-treat pancreatic cancer. Their approach involves sequencing a surgically removed tumor and selecting the neoantigens that are most likely to elicit a robust immune response. Tumor samples are sent to BioNTech in Germany to create customized vaccines for each patient (a product dubbed autogene cevumeran, also known as BNT122). Meanwhile, the patients receive the checkpoint inhibitor Tecentriq (atezolizumab). When the vaccine is injected, immune dendritic cells make the neoantigen proteins and train T cells to recognize and attack tumors that express them.

As Balachandran reported at this year’s American Society of Clinical Oncology (ASCO) annual meeting in June, eight of 16 participants in a Phase I trial who received the individually tailored mRNA vaccines had activated T cells that recognized their cancer. These patients showed delayed recurrence, suggesting that the T cells activated by the vaccines are doing their job.

Researchers are also studying whether this approach can reduce the risk of colorectal cancer recurrence in people who have undergone surgery and completed chemotherapy. In such patients, the persistent presence of circulating tumor DNA is a warning sign that the cancer could come back. Up to 20 neoantigens from each patient’s resected tumor are selected and used to create a customized mRNA vaccine. The first participant in a Phase II trial was treated last October.

Moderna’s leading mRNA cancer vaccine candidate, dubbed mRNA-4157, can contain up to three dozen different neoantigens. In a small Phase I trial presented at the 2019 ASCO meeting, the vaccine plus the checkpoint inhibitor Keytruda (pembrolizumab) shrank tumors in one third of patients. mRNA-4157 has now advanced to Phase II studies.

Another Moderna candidate, mRNA-5671, which targets tumors with common KRAS mutations, is in Phase I. Further back in preclinical development, mRNA-4359 contains code for PD-L1 (the binding partner of the PD-1 checkpoint protein) and IDO (an enzyme that suppresses T-cell activity). The company plans to test it in people with advanced melanoma and non-small-cell lung cancer.

The mRNA technology can also be used to improve response to CAR-T therapy, which currently works better against blood cancers than solid tumors. BioNTech is studying a CAR T-cell product (BNT211) that targets claudin 6, a molecule highly expressed on several types of tumors, plus an mRNA vaccine (CARVac) intended to help the engineered T cells thrive. A small study presented at this year’s American Association for Cancer Research meeting showed that 43% of people treated with the combination experienced tumor shrinkage.

Beyond vaccines, mRNA technology can also be used to treat cancer in other ways. One approach being explored aims to stimulate immune responses by inserting code for immune-modulating cytokines directly into tumors, which can turn cold tumors hot. BioNTech’s BNT131 contains code for interleukin 12 (IL-12), interferon-alpha and other immune-boosting proteins. Similarly, Moderna’s mRNA-2752 encodes the pro-inflammatory cytokines IL-23 and IL-36 as well as OX40L, a molecule that enhances the activity of various types of immune cells.

Robert Bradley, PhD, of the Fred Hutchinson Cancer Research Center in Seattle, and Omar Abdel-Wahab, MD, of MSKCC, who met when they were Damon Runyon Cancer Research Foundation fellows, have shown that two drugs that disrupt mRNA production can make tumors sprout more neoantigens, making them easier for T cells to spot and possibly more susceptible to checkpoint inhibitors.

mRNA can be used as an editing tool to alter immune cells in the laboratory to make them better cancer fighters. China’s Lion TCR, for example, is using mRNA to give T cells receptors that recognize hepatitis B antigens on liver cancer tumors. Other researchers are using mRNA to modify CAR T cells so they can recognize tumor antigens. And mRNA that encodes tumor-associated antigens can be used to increase antigen presentation by dendritic cells, which activate T cells.

More speculatively, researchers at Oregon State University are working on a prophylactic mRNA skin cancer vaccine that increases production of an enzyme that acts as an antioxidant to prevent skin cell damage from ultraviolet radiation.

Much of this may seem like science fiction today, but the advent of mRNA technology opens up a whole new world of possibilities.

Messenger RNA (ribonucleic acid) is a piece of genetic code that tells cells how to make proteins. The human genetic blueprint exists in the cell nucleus as double-stranded DNA. In a process known as transcription, a section of this code is copied to an intermediary form, a segment of single-stranded RNA that acts as a template for protein production. This mRNA uses cellular machinery called ribosomes to string together building blocks to form new proteins, a process called translation.

Vaccines and therapeutics use synthetic mRNA molecules that encode the desired proteins. COVID-19 vaccines, for example, deliver mRNA blueprints for making the spike protein the SARS-CoV-2 coronavirus uses to enter cells. Cancer vaccines deliver instructions for either tumor-associated antigens frequently found on a particular type of tumor, allowing for off-the-shelf vaccines, or antigens specific to an individual’s tumor (known as neoantigens), which can be used to create personalized vaccines.

mRNA is best thought of as a production platform. Instead of developing each new vaccine from scratch, scientists only need to plug in a different piece of code. This enables the rapid production of new vaccines to target emerging virus variants or evolving cancer cells. What’s more, mRNA vaccines can contain code for multiple targets, which is harder to accomplish with old-school vaccines.

But mRNA is not a panacea. The molecules are unstable and fall apart easily. Injected mRNA deteriorates rapidly in the body—not such a drawback for virus vaccines but a problem when dealing with chronic diseases like cancer. One solution may be self-amplifying mRNAs that include code for RNA replication machinery, enabling them to copy themselves.