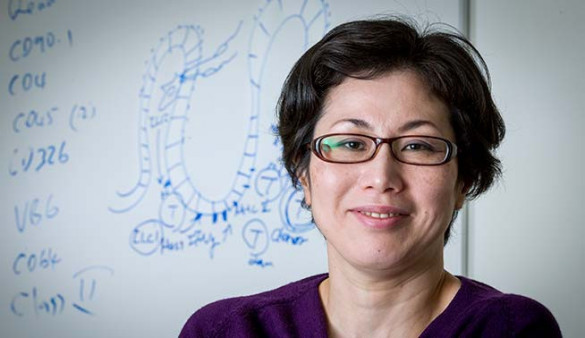 Mystery Solved: How Graft-Versus-Host Disease Starts in the Gut

Bone marrow transplants have been curing some blood cancers for decades. But for just as long, a potentially fatal complication has lurked in the background.

In a bone marrow transplant, a patient’s diseased blood-forming stem cells are wiped out and then replaced by a donor’s healthy cells. Those donor cells are the key to the cure; they recognize and attack the patient’s cancer cells.

But sometimes they attack the patient’s healthy cells, too. This condition, called graft-vs.-host disease, can develop throughout the patient’s body in organs like the skin, liver, eyes and lungs.

If GVHD occurs in the gut, it can be lethal. But how the disease occurs has been a mystery. Until now. A new study published in the journal Immunity identifies the complex chain of events that triggers GVHD in the gut. It involves a large cast of cells and molecules, including some from a surprising source: the trillions of tiny organisms that live in and on us known as the microbiome.

The scientists, led by Motoko Koyama, MD, PhD, and Geoffrey Hill, MD, of Fred Hutchinson Cancer Research Center, also found a promising clue as they traced the disease’s complicated pathway. One of the key players in that pathway is a chemical signal called interleukin-12. By snuffing out that signal, the researchers could prevent the disease from happening in mice. They are now applying for funding to test this approach in transplant patients via a clinical trial.

For Hill and Koyama, the study caps years of experiments trying to solve this whodunit. The question was never just academic. Both have seen transplant patients suffer and die from GVHD.

“Whether you live or die after a [donor] bone marrow transplant can, to a large extent, depend on whether or not you get graft-vs.-host disease of the gut,” said Hill, who directs Hematopoietic Stem Cell Transplantation at Fred Hutch. “Now that we understand that the gut both initiates and is itself the target of GVHD, we might be able to intervene to stop the whole process from starting.”

To cause gut GVHD, an amateur cell turns pro

Special immune cells called T cells, which help the body fight cancer, cause GVHD. They are the transplanted cells (the “graft”) that start attacking the patient (the “host”).

Other immune cells often tell T cells what to do and whom to attack. The teammates that typically do that are called professional antigen-presenting cells, or APCs. These cells are sentinels that capture bacteria and other bad guys and then display bits of them to T cells. Professional APCs use a molecule called MHC-II to hold up the bacterial and viral pieces, which are like “Wanted” posters to the immune system.

Scientists had long thought the professional APCs behind gut GVHD were a type called dendritic cells. But in 2012 Koyama upended that view in a paper published in the journal Nature Medicine. They weren’t the culprits at all; if anything, GVHD was even more severe when dendritic cells weren’t involved.

She proceeded to eliminate the other groups of professional APCs. The transplant field was left to wonder: So what initiates the deadly disease?

Years of further experiments finally yielded an answer. The twist: A professional APC wasn’t the trigger. Instead, an “amateur” in the gut was rousing the T cells to action.

As spelled out in the paper, the path toward GVHD in the gut begins with the microbiome. (Hill and Koyama are collaborating with Fred Hutch microbiome expert David Fredricks, MD, to try and identify the species of bacteria involved.)

Here is the quick version of that path:

The chemotherapy and radiation treatment a patient receives before a transplant can damage the intestinal wall. That exposes immune cells in the gut, called macrophages, to the bacteria in the microbiome. Signals from this community tell these immune cells to produce the chemical interleukin-12. That chemical reaches other immune cells including T cells, which start to secrete a molecular message of their own. And here is the twist. This new message tells the cells lining the surface of the intestines to become nonprofessional APCs. In response, the molecule MHC-II starts to cluster on the surface of these intestinal cells. That means more “Wanted” posters are on display for the immune system, which can start to rev up.

In transplant patients, the conditions are ripe to tip the gut into a full inflammatory response: GVHD. T cells now start to kill off healthy cells lining the patient’s intestine. Patients can start to experience severe pain, diarrhea and vomiting. They might not be able to properly digest food. The most severe cases can lead to organ failure and life-threatening infections.

The researchers are proud to have finally mapped the cellular and molecular pathway that leads to GVHD of the gut. But more importantly, they are eager to throw a wrench into the process. A drug, already tested in patients for other conditions, exists to block interleukin-12, a key chemical signal in the process. They hope to test it soon in a clinical trial that gives the drug to patients before transplantation.

“We were always interested in figuring out what cells initiated the immune response,” said Koyama, a staff scientist at Fred Hutch. “We thought if we could stop the disease from being initiated, that would be better than trying to stop the disease once the T cells get activated.”

Grants from Australia’s National Health and Medical Research Council, and the National Heart, Lung, and Blood Institute supported this research.

This article was originally published on September 18, 2019, by Hutch News. It is republished with permission.