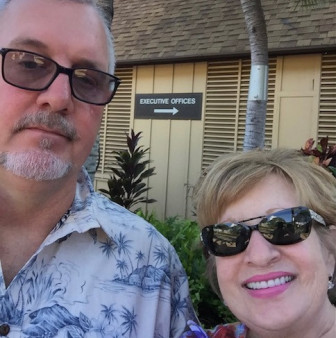 Daniel and I in Hawaii in 2016 Courtesy of Lindy Sledge

A former labor and delivery nurse, Lindy Sledge, 62, lives with her family in Franklin, Kentucky. She has mantle cell lymphoma.

I’ve worked on and off as a nurse but also as a hairstylist. In 2004, I was working in a hair salon in the Murfreesboro, Tennessee, area. The day I got diagnosed with cancer was my last day of work as a hairstylist.

After all the testing was done, we decided I would undergo an eight-round course of chemotherapy treatment with a combination of drugs. They placed a port for the regimen, which was administered every 21 days. I started my first round of chemo.

As a result of the treatments, I experienced severe nausea, vomiting and terrible fatigue. I had a very hard time eating anything. They gave me a drug that helped somewhat. During the 21 days between treatments, I’d just start to feel better when it was time for another round!

I had a great oncology team that included dietitians, a pharmacologist, nutritionist and a psychologist. I found talking to the psychologist very helpful, and I found a couple of support groups online where I talked to people who also had lymphoma.

At the beginning of the month, I underwent my last round of chemo. My oncologist told me that my tumor markers and everything looked good and that I was in remission. Then he said, “I want you to have a stem cell transplant.” This is because mantle cell lymphoma (MCL) has a very high recurrence rate, and when it recurs, it’s hard to treat. He sent me to talk to a specialist in Nashville. 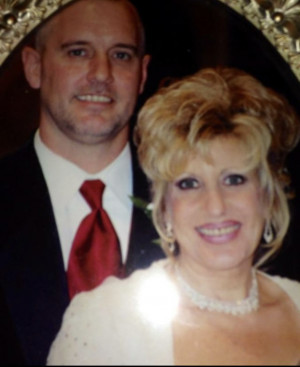 My husband, Daniel, and I at our wedding three and a half years before my diagnosis.Courtesy of Lindy Sledge

At my first appointment with the oncologist in Nashville, they told us about two types of transplants: an autologous transplant that uses your own bone marrow cells and another from a donor, which is called an allogeneic transplant. I was a candidate for the allogeneic transplant, and we went with my brother, Dale.

I underwent conditioning for two weeks to eradicate my own bone marrow, which was like undergoing super chemo on steroids. My brother also had to go through a somewhat intense regimen himself. He had to take shots and a drug to increase his white blood cell count every day so he would produce more stem cells.

On the 13th, I got the transplant. I had to stay across the street from the hospital in the American Cancer Society’s Hope Lodge because we lived about an hour away from the hospital. I had procedures daily at the hospital’s Transplant Center. These included transfusions, blood work and infusions of medication.

I went home at the end of the month. There were also very stringent rules about being clean, being around people who were sick, wearing masks in public, not eating certain things and not going to restaurants, among a whole lot of other precautions I had to take to avoid getting an infection.

I was happy to be home, but I was also worried about my health going forward because relapse is always in the back of your mind. Still, I was thankful to be alive. I knew our lives were going to be different, and I almost felt overwhelmed.

I was told they needed to do another donor lymphocyte transfusion, which involved my brother giving another stem cell donation for a second stem cell transplant. But the bone marrow and blood cell percentage from my donor still didn’t go up enough to suit the doctors, so they gave me a third infusion. My percentage went up to about 64% then, but I got septic and ended up in the hospital extremely ill.

My doctor decided just to make sure I got CT scans and blood work done frequently to keep an eye on me.

I appeared in a video for a song by country music singer Martina McBride called “I’m Gonna Love You Through It.” We don’t live far from Nashville, and she auditioned people to be in her video via essays, and I got selected. My husband and brother were also in the video. The song is about a breast cancer survivor and her supportive husband. During the filming of the video, I met Hoda Kotb, Katie Couric and Sheryl Crow. This was really neat. (Click here to see the music video Lindy appeared in.)

I was in the hospital because I got C. diff (Clostridium difficile), a serious gastrointestinal infection. This diagnosis and hospital admission came on the heels of a previous stay of several days in the hospital for pneumonia. This was three years post-transplant, and I’d already experienced a couple of prior hospital stays for infections.

Chronic hospital stays just reinforced to my husband and me that when the doctors said my health would have a new normal after transplant, events like this would be normal for me.

I attended my first Relay for Life. It’s a yearly fundraiser sponsored by the American Cancer Society where people walk to raise money for cancer research. Survivors are honored and asked to tell how long they’ve been a survivor.

You get a T-shirt, but my biggest satisfaction is that I love talking to people. I think that we should try and support one another. One of the most burning things to me would be to have to go through cancer by yourself, without somebody to answer a question or point you in the right direction.

I’ve had people tell me that I made them feel so much better. If I can help somebody else or answer a question, I try to put as much information out there as I can. 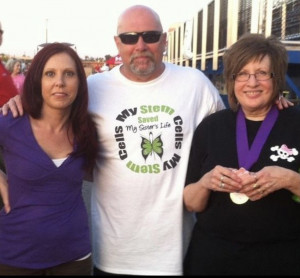 My sister, Melissa Turner; my brother Dale Murphey, who was my donor, and I. We were at the Relay for Life in 2014.Courtesy of Lindy Sledge

When I attended a second Relay for Life event, I was asked to speak. I kinda just got up there and winged it. I don’t have a hard time talking. My brother also spoke.

I had the flu and got pneumonia, so I was put in the hospital. We had gone on vacation, and when I got home the next morning, I woke up sick with the H1N1 strain of the flu.

I went to Light the Night, a Lymphoma and Leukemia Society event especially for blood cancers that’s always held in October.

This event was a positive experience for me. To be surrounded by others who have been affected by blood cancers as either a patient or caregiver is an experience of sharing that’s cathartic.

My dad passed away. My father had heart problems for the past 20 years and died of heart disease. He and my mom had stayed with me for over a month at the Hope Lodge. They took turns helping me and were with me through this cancer journey from the start.

I was very close to my dad. We have a very tight-knit family.

I had my first knee replacement. The doctor said both my knees were bone on bone. That could be because I had to take a lot of steroids. Steroids were part of my chemo, and the doctors said these meds cause bone issues and thin your skin.

A friend I talked to in the lymphoma forum passed away. He had his transplant on the same day I got mine. He’d told me his cancer was back. I thought that after 10 years, maybe we were out of danger. But it’s just one of those things. Once you’re told you have cancer, I think it’s always in the back of your mind that it might come back.

My mom passed away. She had experienced Stage IV kidney failure and was on dialysis for the last nine months of her life. She died of congestive heart failure as a complication of her kidney failure. But I also think she died of a broken heart somewhat because she missed my dad so much.

Losing both parents within months of each other was devastating to me and exacerbated my depression. I miss my parents terribly.

I got sick on New Year’s Day. One of my little nephews who I held in my lap while we were visiting my mom when she was so sick had a very contagious respiratory virus. It caused me to get pneumonia, so I ended up in the hospital.

In addition, I also got cataracts from chemotherapy. 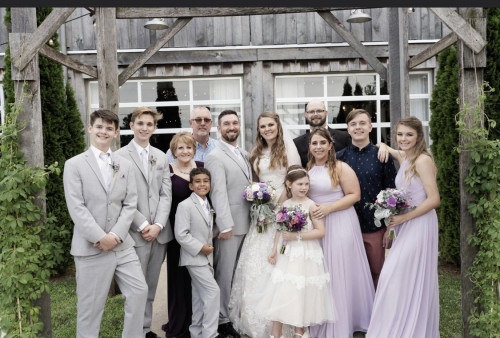 Daniel and I at our son’s wedding in June 2019 with our grandsons Jordan, Gabe and Jackson; our son, Jesse, and his wife, Virginia; granddaughter, Payton; our daughter, Hayley, with her husband, James; grandson, Klint, and granddaughter, Jessica.Courtesy of Lindy Sledge

The cataracts worsened to the point that they were affecting my vision. In May and June, I had them removed from both eyes.

This month, I underwent knee replacement for my other knee.

The pandemic is here, and there’s a new mask-wearing protocol that many people hate. But I’m used to it because of when I had to wear a mask after my cell stem transplant. At that time, I did what people are doing now to keep from getting the coronavirus.

I am currently in remission. I still regularly see my oncologist for blood work and continue to get scans. The unpredictability of mantle cell lymphoma makes me hypervigilant about my health. Every year that passes makes me thankful that I am still in remission. This lymphoma subtype has a high recurrence rate. Each year out makes me feel blessed.

I recently learned of the death of a patient I met on a support group website who, like me, had mantle cell lymphoma and had his transplant on the very same day. Unfortunately, he relapsed. I honestly don’t think I will ever be confident that I won’t relapse.

Even years later, this is always in the back of my mind. I have health issues as a result of the intensity of having a transplant and chemo, but we deal with them and life goes on.