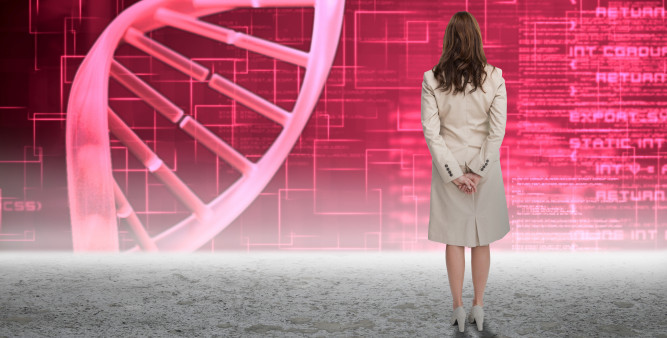 Experts advise screening for those with a personal or family history of breast or ovarian cancer, but not for all women.

The U.S. Preventive Services Task Force (USPSTF) today issued updated recommendations on risk assessment, genetic counseling and genetic testing for BRCA-related cancer. The task force found that while some women can benefit from testing for these uncommon genetic mutations, BRCA screening is not appropriate for all women.

The new recommendations, published in the Journal of the American Medical Association, are based on a review of more than 100 studies that together involved nearly 93,000 participants.

BRCA1 and BRCA2 are tumor suppressor genes that affect susceptibility to cancer. Normally, these genes produce proteins that repair broken DNA, but in people with certain BRCA mutations, DNA damage cannot be fixed and cells grow out of control.

Women with harmful BRCA mutations have a much higher likelihood of developing breast and ovarian cancer. While about 12% of all women will develop breast cancer during their lifetime, this rises to around 70% for those with these mutations, according to the National Cancer Institute. BRCA mutations also increase susceptibility to pancreatic cancer, prostate cancer, some types of leukemia and lymphoma and possibly other cancers as well.

These inherited mutations are rare overall—about 1 in every 300 women—but they’re more common in certain ethnic groups, notably Jewish people of Ashkenazi or Eastern European ancestry. Other less-studied populations have recently been found to have high BRCA mutation rates, including African-American women, Latino people in the U.S. southwest and groups in Nigeria and India, according to an accompanying editorial by Padma Sheila Rajagopal, MD, MPH, and colleagues from the University of Chicago. If either parent carries a BRCA mutation, there’s a 50% chance that their children will too.

The first new USPSTF recommendation states that women who may be at risk for BRCA-related cancers should be assessed by their primary care provider using a brief family risk-assessment tool. These include women with previous breast, ovarian, Fallopian tube or peritoneal (lining of the abdominal cavity) cancer who were successfully treated and are now cancer-free, as well as those with a family history of these cancers and those with an ancestry linked to higher likelihood of harmful BRCA gene mutations.

If the assessment tool suggests potentially elevated risk, these women should receive genetic counseling and, if indicated after counseling, genetic testing for BRCA mutations. For some women who qualify for genetic testing, it may make sense to opt out if the results would not influence their decisions about prevention and care.

This recommendation received a “B” grade, meaning there is evidence that these services offer moderate benefits that outweigh the risks. Under the Affordable Care Act insurers are required to cover preventive services recommended by the USPSTF with an “A” or “B” rating.

For women who do not have a personal or family history of BRCA-related cancers or an ancestry associated with harmful BRCA mutations, the USPSTF recommends against routine risk assessment, genetic counseling and genetic testing. This second recommendation received a D grade, meaning evidence indicates that the services either offer little or no benefit or the harms outweigh the benefits.

The recommended assessment tools combine several risk factors, such as developing breast or ovarian cancer before age 50, having cancer in both breasts or ovaries, having multiple family members with these cancers and having a male relative with breast cancer, as well as ancestry.

Genetic counseling involves education about BRCA-related cancers, the benefits and harms of genetic testing, how to interpret test results and options for prevention and care. While genetic blood tests are highly accurate for specific BRCA mutations, interpretation of what those mutations mean in terms of cancer risk can be complex, according to a summary of the recommendations for patients.

BRCA genetic testing is currently underused, as only 20% to 30% of women who have had breast or ovarian cancer themselves, and less than 10% of those with a family history of these cancers, have discussed testing with their providers, according to Rajagopal and colleagues. Genetic testing is increasingly shifting to panel tests that include multiple genes, rather than individual ones, and consumer genetic tests such as 23andMe (which can detect only a few known BRCA variants) are now available.

People found to have harmful BRCA mutations should inform their family members so they can get tested too. Women with these mutations are advised to start breast cancer screening at a younger age and repeat it more often. Some women with harmful BRCA mutations may decide to take preventive medications (such as tamoxifen) or undergo prophylactic mastectomy or removal of the ovaries and Fallopian tubes. If cancer does develop, people with these mutations may benefit from a class of drugs known as PARP inhibitors. The new USPSTF recommendations, however, do not include advice about specific prevention or treatment approaches.

These recommendations are limited to women, as there is much less research on BRCA mutations and cancer in men. Studies show, however, that about 6% of men with metastatic prostate cancer have harmful BRCA mutations, compared with 5% to 10% of women with breast cancer. In another accompanying editorial, Rachel Yung, MD, of the University of Washington in Seattle, and Larissa Korde, MD, MPH, of the National Cancer Institute, said that this was a “missed opportunity” to offer recommendations for at-risk men.

Similarly, Lisa Newman, MD, MPH, of Weill Cornell Medical Center in New York noted that there is also insufficient evidence about the link between genetic variations and cancer risk among women of African ancestry, who have a higher rate of hard-to-treat triple-negative breast cancer.

“Paradoxically, the data-driven basis for the USPSTF recommendation statement may magnify existing genetic testing disparities,” Newman wrote. “[I]t remains imperative for clinicians to exercise clinical judgment and to be mindful of patient subsets that do not necessarily fit into recommendations designed for the majority or general populations.”

Click here to read a summary of the recommendations for patients.

Click here to learn more about BRCA and cancer risk.