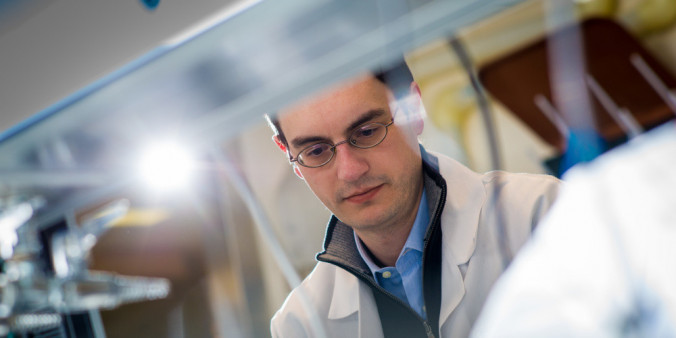 The four trials are geared to the 10 to 15 percent of people with endometrial cancer who are diagnosed with an advanced stage of the disease.

In recent years, there has been a dearth of clinical trials studying new approaches to how endometrial cancer, which forms in the lining of the uterus, is treated. That is changing rapidly, however, as basic research into the disease spurs the testing of novel drugs and drug combinations. A host of clinical trials—including four led by Dana-Farber investigators—are now being launched.

The trials are especially geared to the 10 to 15 percent of patients with endometrial cancer who are diagnosed with an advanced stage of the disease. These patients almost always relapse after receiving standard therapy, at which point the disease generally can’t be cured with existing drugs.

Dana-Farber research into the biology of endometrial cancer suggested potentially promising new ways of attacking the disease with targeted therapies as well as immunotherapies. The four new phase II trials, either recently opened or opening shortly, include:

Each of the trials addresses a shortcoming of standard therapy or a problem identified in previous trials of novel drugs. The first two trials, for example, seek to overcome the fact that immunotherapies haven’t worked well in patients with MSS disease. The third tackles the problem of resistance to hormone therapies, and the fourth targets a specific subtype of endothelial cancer.

Treatment for endometrial cancer is determined by the stage of the disease—the extent of its development—when diagnosed and by other health conditions that patients may have.

Women with stage I cancers, which haven’t spread beyond the uterus, are generally treated with surgery. If the tumor is high-grade, or aggressive, doctors are likely to recommend radiation therapy and/or chemotherapy after surgery.

Treatment for stage II endometrial cancer, which has spread to the connective tissue of the cervix but remains within the uterus, involves surgery—including an examination of nearby lymph nodes for signs of cancer that has spread—and radiation therapy. Chemotherapy may also be needed for certain aggressive subtypes of endometrial cancer.

The extent and sequence of these therapies varies depending on the extent and grade of the cancer and the patient’s overall health.

Treatment for stage III endometrial cancers, which have spread outside the uterus, may involve a radical hysterectomy plus the removal of both ovaries and fallopian tubes plus radiation therapy and/or chemotherapy depending on where and how far the cancer has spread. More aggressive tumors may entail more extensive surgeries.

Most stage IV endometrial cancers, which have grown inside the bladder or bowel or outside the pelvis, have spread too far to be entirely removed by surgery. Patients may still undergo a hysterectomy and removal of the fallopian tubes and ovaries to prevent excessive bleeding. Radiation therapy may also be used for this purpose. Hormone-blocking therapy may be used to stall the growth of cancer cells in other parts of the body, but aggressive cancers not driven by hormones are unlikely to respond to such drugs. Some patients with advanced endometrial cancer benefit from chemotherapy for a time.

For patients whose cancer returns after initial therapy, treatment reflects the amount and location of the cancer. If the recurrence is local, such as in the pelvis, surgery, sometimes followed by radiation therapy, may be used. For distant recurrences, surgery and/or radiation therapy may be used when the cancer is confined to a few small areas. Women with more extensive recurrences are treated with the same approach as those with stage IV endometrial cancer.

This article was originally published on December 12, 2018, by Dana-Farber Cancer Institute. It is republished with permission.