Xtandi and Erleada both prolonged the time to disease progression or death by about two years.

In the PROSPER trial, Xtandi lowered the risk of cancer spreading to other parts of the body (a process known as metastasis) or death by 71 percent. In the SPARTAN trial, Erleada reduced metastasis or death by 72 percent.

About 165,000 men in the United States will develop prostate cancer this year, and it is the second leading cause of cancer-related death, according to the American Cancer Society.

Xtandi (from Astellas Pharma and Pfizer) and Erleada (from Janssen) are next-generation nonsteroidal medications that interfere with androgen receptor signaling and block the action of androgens in the body, including their ability to stimulate prostate cancer growth.

Prostate cancer often develops resistance to first-line ADT and progresses despite low testosterone levels, a characteristic known as being castration-resistant. There is currently no approved treatment for men with castration-resistant cancer who show no evidence of metastasis using existing imaging tests—known as stage M0—but who are considered high risk due to rising levels of prostate specific antigen (PSA), a biomarker associated with disease progression.

Some experts favor “watchful waiting,” but the cancer can spread quickly to the bones or other organs, which can lead to pain and fractures. The median survival time for men with metastatic prostate cancer is only about 2.5 years.

“There is a population of men with prostate cancer who have no visible evidence of spread but who have a rise in their blood markers,” Sumanta Kumar Pal, MD, from City of Hope near Los Angeles, said in an ASCO press release. “These patients can have a poor prognosis, and until now, the optimal management of their cancer remained an enigma. These findings suggest there may finally be a treatment that holds real promise for extending their health and their lives.” 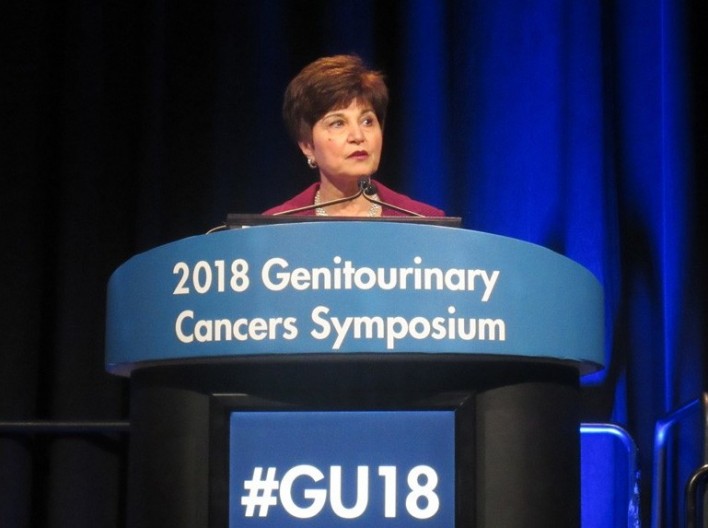 Previous studies showed that Xtandi delays disease progression and improves survival in men with metastatic (stage M1) prostate cancer, and it is approved for this population. Hussain’s team asked whether it could also prolong metastasis-free survival in men with stage M0 cancer and rapidly rising PSA levels.

This international study included 1,401 men on ADT with testosterone levels of 50 nanograms per deciliter or less and PSA levels of at least 2 ng/ml (median of about 11 ng/ml). PSA doubling time was 10 months or less, with a median of about 4 months. The median age was 74.

Study participants stayed on their existing ADT and were randomly assigned to add either Xtandi capsules (160 milligrams once daily) or a placebo.

Men taking Xtandi were about half as likely as those taking the placebo to experience disease progression, including metastasis to bones or soft tissue or death (23 percent versus 49 percent, respectively).

Xtandi significantly delayed the spread of cancer, meaning the difference was probably not attributable to chance. The median metastasis-free survival time was 36.6 months in the Xtandi group compared with 14.7 months in the placebo group. Men taking Xtandi also had a longer time until they saw rising PSA levels (37.2 versus 3.9 months, respectively) or needed to start another cancer therapy (39.6 versus 17.7 months).

Although it is too soon to determine overall survival because a majority of study participants in both treatment groups are still alive, the interim data favor Xtandi, with a 20 percent reduction in deaths, Hussain reported.

Of note, Hussain reported that 15 percent of men in the Xtandi group who did not have evidence of metastasis on imaging scans died within four months after stopping treatment, compared with just 2 percent of placebo recipients—a finding that remains unexplained.

For men with nonmetastatic castration-resistant prostate cancer and rapidly rising PSA levels, treatment with Xtandi resulted in a “clinically meaningful and statistically significant” reduction in the risk of metastatic disease, the researchers concluded.

Based on these findings, Astellas and Pfizer have asked the Food and Drug Administration (FDA) to expand approval of Xtandi for this population.

Eric Small, MD, of the University of California at San Francisco, presented results from SPARTAN, a Phase III trial comparing Erleada versus placebo for men with nonmetastatic prostate cancer that had stopped responding to ADT. These findings were also published in The New England Journal of Medicine. 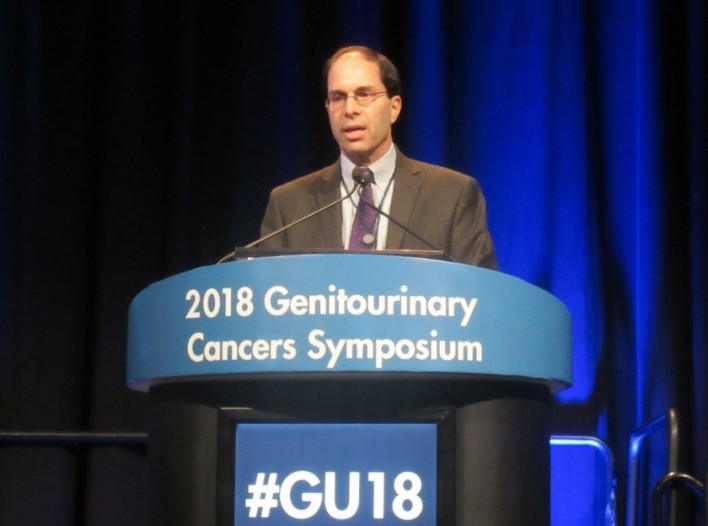 This international trial included 1,207 participants, with a study population similar to that of PROSPER. Again, the median age of the participants was 74 and they had a PSA doubling time of 10 months or less (median 4.5 months).

The men were randomized to receive Erleada pills (240 mg once daily) or a placebo along with ADT. Those who developed metastases were eligible to switch to the older anti-androgen drug Zytiga (abiraterone acetate) plus prednisone.

Men taking Erleada had a median metastasis-free survival of 40.5 months, compared with 16.2 months in the placebo group—a 72 percent reduction in the risk of metastasis or death. They also had a 94 percent lower likelihood of rising PSA levels. The findings were strong enough that the study was unblinded and the men in the placebo group were offered Erleada.

Among men with disease progression who underwent treatment for metastatic cancer, the risk of a second progression was 51 percent lower in the Erleada group.

The median overall survival was 39 months in the placebo group but was not reached in the Erleada group because most of those men were still alive, representing a 30 percent reduction in deaths in this interim analysis.

Patients taking Erleada had a longer time before they experienced worsening pain or other symptoms—perhaps a more relevant measure than changes on imaging scans. The risk of symptomatic progression was 55 percent lower in the Erleada group. However, average health-related quality of life scores were stable and similar in the two groups.

Turning to side effects, 45 percent of men taking Erleada plus ADT and 34 percent of those taking the placebo plus ADT experienced severe adverse events;11 percent and 7 percent, respectively, stopped treatment for this reason. Side effects were more common in the Erleada group than in the placebo group, including fatigue (30 versus 21 percent), rash (24 versus 6 percent), joint pain (16 versus 8 percent), bone fractures (12 versus 7 percent) and hypothyroidism (8 versus 2 percent).

“These data demonstrate that the use of apalutamide [Erleada] prior to the development of metastases clearly benefited patients whose prostate cancer no longer responded to conventional hormonal therapy,” Small said in the ASCO press release. Erleada “should be considered as a new standard of care” for these men, he told reporters during a preconference press briefing.

Based on these data, the FDA has granted Erleada priority review status for this patient population, with a decision expected in April.

What Does It Mean?

In light of these findings, experts at the conference discussed when and how to treat men with nonmetastatic castration-resistant prostate cancer.

Hussain noted that many patients classified as having stage M0 disease are likely to have “micrometastases,” or small clusters of cancer cells that don’t show up on existing imaging tests. She said delaying metastasis is important and that often in oncology moving treatment earlier leads to better outcomes, but doctors “will have to sit down with patients and explain the pros and cons.”

Philip Kantoff, MD, of Memorial Sloan Kettering Cancer Center, said that while both studies showed positive results, the benefits of a treatment must clearly outweigh the risks for patients who are currently asymptomatic. Treatment with Xtandi or Erleada is unlikely to lead to a cure, and while the interim survival data are promising, “it’s too early to be sure.”

Slowing symptom progression is important to patients, and stopping PSA levels from rising can have a psychological benefit, Kantoff added. But this must be balanced against the adverse events of treatment, including the greater risk of falls and fractures among men taking Erleada. And the higher number of unexplained deaths among men taking Xtandi requires further study.

During the press briefing, Pal suggested that this patient population may be shrinking as more accurate imaging tests move people from the M0 to the M1 category, for which there is more consensus about the need for treatment.

Click here to read the ASCO press release about the SPARTAN findings.