My phone rang at the rented apartment we had just moved into for four months while I underwent a stem cell transplant and follow-up care at Stanford Hospital. I heard my doctor say, “Go home Wanda. Your donor just backed out. No, you can’t be admitted tomorrow for your transplant. We will try to find another match for you, but it will be difficult because he was your only perfect match in the world.” My donor had all the right antigen markers for me.

Those words from 2011 still ring in my ear. Since 2006, I had been battling a particularly aggressive form of the blood cancer chronic lymphocytic leukemia (CLL). Chemo wasn’t keeping it under control, and the disease so impaired my immunity that I had reoccurring life-threatening infections. We were shocked, and, in truth, so were our doctors at Stanford Hospital; no one had ever backed out the day before admission for a stem cell transplant.

My husband and I drove for seven hours back home, the longest drive of my life. Two weeks later, within 40 minutes of not feeling well, I went into a coma with septic shock. I wasn’t expected to survive.

Four days later, I woke up from the coma to the news that another match had been found. It wasn’t a perfect match, so there was a risk of complications, such as graft-versus-host disease, in which the body rejects the transplant.

Nevertheless, I thought of him as my “perfect stranger.” Aaron, a family man from a tiny town in Texas, never expected the phone call he received 18 months earlier after signing up with Be The Match, a national marrow registry. After discussing his nervousness with his wife, she asked him what he was going to do. His response was: “I’m gonna go save her life.”

This time I did enter Stanford Hospital. I had radiation and preconditioning with a monoclonal antibody. I was fearful that this donor would back out too. When transplant day arrived, Aaron’s cells were delivered via courier and dripped into my Hickman catheter [a central line catheter placed on the right side of the chest wall]. I held tightly to the tube and gave thanks to someone I never met whose cells were flowing through me. Such a strange feeling.

In the end, Aaron’s cells acted like a perfect match. I am happy and healthy—in remission now since 2012—and became a volunteer courier for Be The Match. I give back by delivering life-saving cells to recipients. 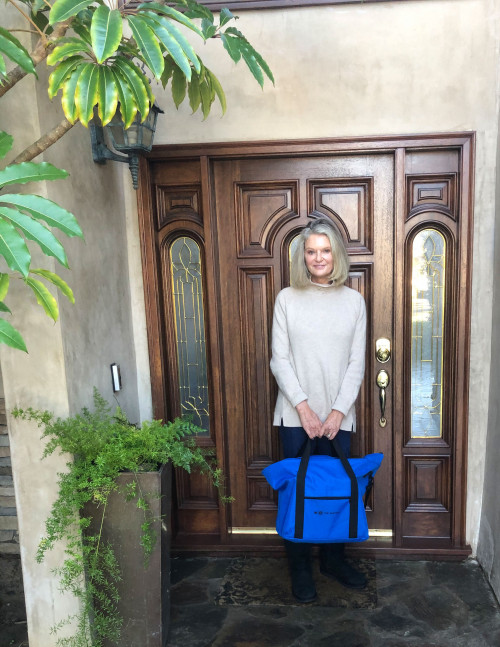 Aaron and I corresponded for a year through cards and letters, and one day, I picked up the phone. I was overcome with emotion. How do you thank someone who saved your life, knowing that he could’ve backed out—but didn’t?

Shortly after the phone call, my employer at the time, Southwest Airlines, flew Aaron, his wife and their three children to meet me, my husband and our three children. At the airport, I held on to this man like a long lost friend. We took them to Disneyland for the week.

In the 10 years since that moment, we’ve stayed in close contact, gone on a cruise together, had them to our ranch in Colorado. I send a note to Aaron every year on my transplant anniversary to thank him for saving my life.

Now my “perfect stranger” is not a stranger to me anymore. He’s just perfect.