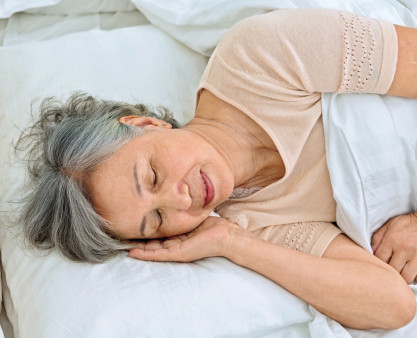 A good night’s sleep goes beyond helping you stay fresh at the office the next day.

That’s important, of course, and in my personal life I’ve tried to focus even more on getting quality sleep in 2020; my schedule can be hectic, so good sleep is important, simply to fight back against fatigue.

But there’s more to it than that. Poor sleep is linked to several disturbing health problems, and some of them may be surprising to find out about.

This week, I want to share a quick look at how poor sleep can lead to severe health issues — and a few tips to make sure you’re getting the rest you need.

Let’s start with our waistlines: Poor sleep isn’t good for them.

Research shows sleep deprivation leads to weight gain because of multiple changes to your body.

When you don’t get enough sleep, your body reduces the release of leptin, a hormone that helps suppress appetite and encourages the body to use energy.

A lack of sleep also leads the body to gain more weight: one interesting study from 2018 showed that one week of sleeping 5 hours per night led participants to gain an average of 2 pounds. The researchers found staying up late shifted the eating habits of the participants and made them eat less healthy food.

This is a consistent trend across years of research. People who sleep less than 6 hours per night are more likely to have a higher body mass index; researchers believe poor sleep throws the body’s hormonal balance off and leads to less control over appetite and metabolism.

In short: if you’re trying to get ready for beach season, putting sleep on the backburner isn’t going to help.

This goes hand-in-hand with the previous issue: poor sleep contributes to diabetes.

In particular, Type 2 diabetes is more common for those suffering from sleep deprivation than those who get at least 7 hours of sleep each night. This is especially true for middle-aged and older adults, where those who do not get enough sleep each night are twice as likely to be diagnosed with type 2 diabetes.

That’s because sleep helps regulate glucose and, as mentioned above, metabolism. Sleep deprivation also leads to a spike in cortisol, which can make cells more resistant to insulin.

I’ve written at length about the connection between poor sleep and diabetes in the past; you can read more here if you’d like.

Your heart, just like the rest of your body, needs sleep to function at its best.

This is clear, after several studies have shown poor sleep contributes to factors leading to heart disease. Researchers from Tufts University last year looked at nearly 4,000 healthy participants, who had their sleep monitored and tracked. Participants who slept the least had the most harmful plaque buildup in their arteries — which is an early sign of cardiovascular disease and increases the risk of heart attack. This holds true no matter the participant’s age, weight or whether they smoke or exercise regularly.

At the same time, poor sleep has been tied to an increase in blood pressure. Over an extended period, this leads to more plaque blocking the coronary arteries. Perhaps most alarming, though, is that those who sleep for 6 hours or less are 20% more likely to suffer their first heart attack, compared to those who get between 6-9 hours of sleep each night.

Here’s something to keep in mind, especially while it’s still cold outside: Your body has a much tougher time fighting back against disease and illness when it’s sleep deprived.

The key thing to remember is that poor sleep reduces the production and release of cytokine, a versatile protein that helps the immune system respond to threats. When you’re sleep deprived, your body isn’t able to act as quickly, or send as much cytokine, to counter any problems it might run into.

Research conducted by the University of California, San Francisco, showed how important sleep is to immune function in 2015. Participants had their sleep monitored for a week, and then were exposed to the common cold virus. The results were striking, with participants who got 6 hours of sleep or less each night being 4.2 times more likely to catch the cold than volunteers who got quality rest.

To avoid the annual cold bug — and keep your immune system ready to fight even bigger threats — sleep is vital.

I saved perhaps the most alarming problem for last. Poor sleep, simply put, kills your sex drive. This goes for both men and women, too.

For guys, your body needs sleep to produce testosterone. Most testosterone production occurs during sleep, primarily during REM sleep, the period of the night associated with dreaming.

And this one will be obvious: the more tired you are, the less inclined you are to actually have sex. About 25% of married Americans have said fatigue caused by sleep deprivation is the main reason they’re not having sex.

If you want to improve your love life, start with getting more sleep.

All right, I’ve just spent a nice chunk of time scaring you about the downsides to poor sleep.

But the good news is, fixing this issue doesn’t necessarily take much work. Here are a few tips to help you get better sleep:

That’s it for today, but hopefully you learned a little more about why I’m so determined to help you get the best sleep possible — our health depends on it!