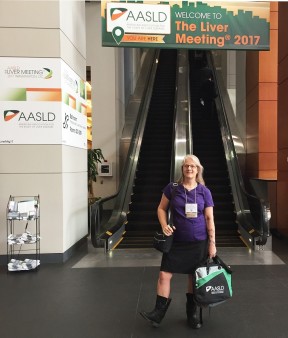 One of the major international conferences on all aspects of liver disease, opened Sunday in Washington, DC.

The annual AASLD Liver Meeting, one of the major international conferences on all aspects of liver disease, opened Sunday in Washington, D.C. This year’s meeting will draw around 10,000 participants and feature more than 3,000 scientific abstracts.

While much of the excitement at the Liver Meeting in recent years has focused on hepatitis C, it is shifting to other areas such as fatty liver disease and liver cancer now that hepatitis C can be easily cured.

Over years or decades, chronic hepatitis B or C, heavy alcohol use, fatty liver and other risk factors can result in liver inflammation, cirrhosis (scarring) of the liver and ultimately liver cancer, or hepatocellular carcinoma. This cancer takes a long time to develop and generally has no specific symptoms at early stages, so it is often detected late and is hard to treat.

As I’ve been covering HIV and hepatitis B and C for more than 20 years, including for Cancer Health’s sister publications POZ and Hep, we’ve seen remarkable progress. HIV can be now treated with one-pill-a-day regimens that keep the virus fully suppressed, and there is a pill (known as PrEP) that can prevent HIV infection. New interferon-free treatments can now cure hepatitis C more than 90 percent of the time in just three months. Hepatitis B can be prevented with a vaccine, although it is seldom cured with current treatments.

As fewer people with HIV are dying of AIDS—at least if they have access to treatment, which is not a given even in wealthy countries like the United States—more of them are now getting various types of non-AIDS-related cancer.

This shift in disease burden also applies to heart disease. While heart disease remains the leading killer in the United States (more than 633,000 deaths in 2016), cancer approaches or exceeds it in some groups and regions (nearly 595,000 deaths), according to the Centers for Disease Control and Prevention. The next leading causes—chronic respiratory disease (around 155,000 deaths) and accidental deaths (more than 146,000)—don’t even come close, though opioid overdose deaths are pushing up the latter number.

One study to to be presented here this week found that people who were successfully treated for hepatitis C had a 71 percent lower likelihood of developing liver cancer, whether they were cured with direct-acting antiviral therapy or the older interferon-based therapy.

However, people who have been cured of hepatitis C, as well as those being treated for hepatitis B, still remain at some risk for liver cancer—especially if they have already developed cirrhosis. This means it is important that they continue to received ongoing regular liver cancer screening.

Treatment for liver cancer, as with most cancers, has not yet seen the kind of success we’ve seen for HIV and hepatitis C. But universal hepatitis B vaccination and effective hepatitis C therapies will hopefully lower liver cancer rates—if the rise in fatty liver disease doesn’t cancel them out—and new developments in targeted therapy and immunotherapy hold promise for improved liver cancer treatment in the coming years.