This finding could lead to clinical trials specifically for men with treatment-emergent small-cell neuroendocrine prostate cancer.

Nearly one-fifth of men with metastatic prostate cancer whose tumors were resistant to hormone therapy subsequently developed an aggressive prostate cancer subtype, a new study has shown. Men with this subtype, called treatment-emergent small-cell neuroendocrine prostate cancer (t-SCNC), appear to have shorter survival than men with other subtypes.

The researchers also found genetic differences between t-SCNC and the adenocarcinoma subtype, which accounts for most prostate cancers at diagnosis. Taking advantage of these unique features may improve the diagnosis and treatment of t-SCNC, said lead investigator Rahul Aggarwal, MD, of the University of California, San Francisco.

The study was published July 9 in the Journal of Clinical Oncology.

“The fact that nearly 20% [of men in the study] had this subtype is a surprise,” said William Dahut, MD, head of the Prostate Cancer Clinical Research Section of NCI’s Center for Cancer Research. “That’s a greater percentage than we thought.”

This finding could lead to clinical trials specifically for men with this subtype of prostate cancer, Dahut added.

Emergence of the Neuroendocrine Subtype

Potent hormone therapies like abiraterone (Zytiga) and enzalutamide (Xtandi) can be effective treatments for men with castrate-resistant prostate cancer. However, almost all men eventually develop drug resistance to these agents.

In some cases, the drug-resistant cancer may look and behave differently than the original cancer, so much so that it is considered a different subtype of the disease. For example, some men who were originally diagnosed with adenocarcinoma prostate cancer develop t-SCNC after treatment with abiraterone or enzalutamide.

Under the microscope, t-SCNC looks quite different from adenocarcinoma: the cells are smaller and more crowded together. And compared to adenocarcinoma prostate tumors, tumors of the t-SCNC subtype are thought to have less hormone signaling and lower prostate-specific antigen. 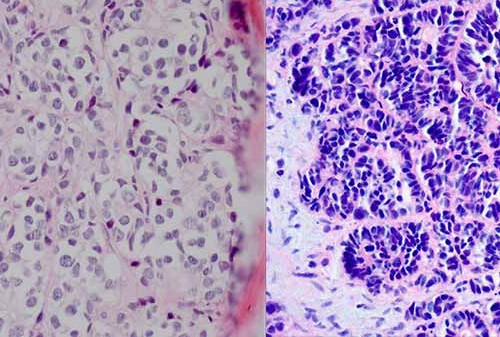 t-SCNC is diagnosed by its appearance under the microscope. Compared with adenocarcinoma (left), t-SCNC cells (right) are smaller and more crowded together.Rahul Aggarwal, MD, of the University of California, San Francisco

In addition, t-SCNC shares some features with a small-cell neuroendocrine subtype of prostate cancer that appears in less than 1% of men with newly diagnosed prostate cancer.

To understand how frequently t-SCNC develops after hormone treatment, Aggarwal and his colleagues analyzed metastatic tumor samples from 202 men with castrate-resistant prostate cancer who had received treatment at multiple institutions. The samples were obtained from metastatic tumors in the bone, lymph nodes, liver, or other soft tissues.

The anatomical site where the metastatic tumor sample had been taken (bone, lymph node, liver, or soft tissue) did not appear to affect the frequency of the neuroendocrine subtype, the researchers found.

In current practice, only patients who have specific clinical features, such as liver metastases, are recommended to have a tumor biopsy to test for t-SCNC. But, based on the team’s findings, “we should be thinking about testing more broadly,” Aggarwal noted. A diagnosis of t-SCNC could lead to a change in treatment strategy, he added.

The investigators prospectively followed the participants to gather data on overall survival, starting from the date that the participant developed metastatic castrate-resistant disease. Men whose metastatic tumors were of the adenocarcinoma subtype lived longer (median of 44.5 months) than men whose tumors were of the t-SCNC subtype (36.6 months) or included both subtypes (36.8 months).

The researchers also examined patterns of gene expression in the t-SCNC tumors and compared them with those of adenocarcinoma tumors. This analysis identified a group of 61 genes that were expressed differentially between the two subtypes. The investigators also identified the topmost upregulated master regulators—proteins that control hundreds or thousands of other genes that are critical for cancer growth and survival—in the t-SCNC tumors.

Based on these findings, the researchers developed a unique pattern of gene expression—called a signature—for t-SCNC tumors that correctly distinguished t-SCNC tumors from adenocarcinoma prostate tumors in separate sets of tumor samples.

The validated signature has several potential clinical uses, said Aggarwal, such as to identify genes or pathways that potentially can be targeted by drugs. And if effective drugs become available, the signature could also be used to help diagnose t-SCNC prostate tumors in cases where a traditional tumor biopsy is not possible or would be unreliable, he added.

The researchers also found that t-SCNC and adenocarcinoma tumors differed in the types of genetic mutations they harbored. Consistent with a previous study, t-SCNC tumors were more likely to have mutations that lessen the activity of two genes that control cell division, TP53 and RB1. And while many of the adenocarcinoma tumors had activity-dampening mutations in, or fewer copies of, genes that help repair DNA, almost none of the t-SCNC tumors did.

Taken together, these findings suggest that t-SCNC tumors may have unique molecular characteristics that can potentially be targeted by drugs, Aggarwal explained.

Aggarwal and his colleagues are investigating how the t-SCNC subtype develops in men with metastatic castrate-resistant prostate cancer.

“We think it arises from [the original] adenocarcinoma,“ Aggarwal said. ”The cancer cells transform into this subtype of prostate cancer through genetic reprogramming.”

Some aspects of this reprogramming event are understood, such as specific factors that control the transition. However, he added, “more studies still need to be done to understand how and when it happens.”

Potent hormone therapies such as abiraterone and enzalutamide may push prostate cancer toward this transformation, said Dahut. That may be why this subtype is more prevalent in men who have received treatment than in men with newly diagnosed prostate cancer, noted Aggarwal.

The research team’s ultimate goal is to find therapies for t-SCNC. Master regulator proteins are opportune drug targets, Aggarwal explained, because they control many pathways that contribute to cancer growth and survival.

Several of the master regulators that they identified in t-SCNC tumors can be targeted directly or indirectly by drugs that are in development, and the team hopes to be able to test these in clinical trials of men with this subtype of prostate cancer.

Dahut also speculated that a better understanding of the genetic reprogramming event that creates t-SCNC could potentially lead to the discovery of drugs that prevent the development of this hard-to-treat subtype.

This post was originally published on July 31, 2018, by the National Cancer Institute. It is republished with permission.