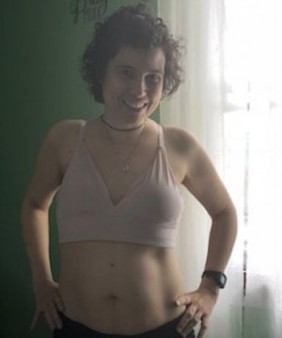 This is NOT AN AD — this is my honest, thoughts of the best bras ever and here is a pic of me in one to prove it!

I do not know what I was waiting for — I never do. I know money is a big issue for me — duh, I share about it a lot and without my mother-in-law’s help, we would have no vacations and probably no house — more on what I feel about that (besides immensely thankful) coming in a future post.

Anyway, when I first was measured for a mastectomy bra in January 2017, I was surprised at how much it looked like a 1950s lingerie contraption. It was a big bra — lots of thickness to the bands and it was beige and with some lace, to show what I do not know — maybe the cover of the big prosthetic? That is another thing, the prosthetic was a size “9” which I guess means instead of a breast, I had a foot (my shoe size is a 9).

I was religious about wearing the prosthetic and the bra everywhere EXCEPT to chemo. I mean if I was gonna get pumped full of chemicals and toxins and poison, I was going to do it comfortably and without a boob. I wore my post surgical compression bra from Sloan to those appointments and rocked the half flat look — but would not even consider doing that elsewhere.

By the time I lost my job and the summer came, I was like why am I doing this? By August, on a trip to Disney, I ditched the prosthetic and walked around half flat and I have honestly not looked back.

I had known about AnaOno from when I began to share my story in June 2017 but I was hesitant to do anything. Why? Funds, fit, comfort, confusion, etc. I even met the designer and owner, Dana (one of my girl crushes) and was finally “ready” to order. But, remember, no job = broke so I was waiting until my friend Irena told me about the “insurance” option via AnaOno that handles the whole process for you — and she got 4 new bras for a small dollar investment and I was like, “Hmmm. This I think I can swing.” I filled out the form and they handle everything. Everything.

Angela, my insurance rep, was an “angel” — she got my doctor’s office to issue a prescription, handled my insurance to get pre-approval and then helped me pick the right size. After all was said and done, it would be $200 for 4 bras, including shipping. That is great, except I did not have $200 and would not expect to have it for a month.

I asked Angela if we could wait a month and she said “no problem” I was so happy and relieved. Then, the end of the month came and I was ready except I only had $100 and not $200. I was worried but called and asked if I could split the order and it was no problem AND despite ordering on Monday, I got the bras in 2 days and was ready to bring them to my vacation with me!!

Trying them on was a dream — the material is so soft it is like a warm hug. Despite only having one boob, it sits well on my frame — I do need to weigh it down with the cotton inserts because I am so against putting in a prosthetic on principle but it works just fine with the two little inserts and the left side just goes without anything except my tit.

I feel that I should not have waited so long so I had to share with all of you to not wait — go for it — this company is top to bottom for breast cancer survivors, patients, previvors, survivors, everything — this is NOT AN AD — this is my honest, thoughts of the best bras ever and here are the pics of me in them to prove it!

Thanks, Dana, for being a kick ass advocate and rockstar! This is what I do in the time between....