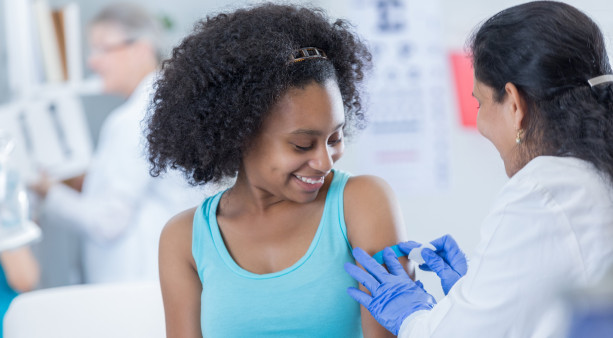 Increasing Use of the HPV Vaccine, an Important Cancer Prevention Tool

In the United States, HPV still causes nearly 34,000 cases of cancer each year.

The President’s Cancer Panel was established under the National Cancer Act of 1971. The panel’s charge under the law is to identify high-priority issues that are impeding progress against cancer, engage the relevant stakeholders, and develop recommendations for addressing each respective issue. The recommendations are included in a report that is submitted to the President. Barbara K. Rimer, DrPH, is the panel’s chair and currently the sole member.

Last month, I released a report to the White House and the public, HPV Vaccination for Cancer Prevention: Progress, Opportunities, and a Renewed Call to Action. This report describes the progress that’s been made toward maximizing the use of the human papillomavirus (HPV) vaccine in the United States and globally over the past 5 years.

Last month, I released a report to the White House and the public, HPV Vaccination for Cancer Prevention: Progress, Opportunities, and a Renewed Call to Action. This report describes the progress that’s been made toward maximizing the use of the human papillomavirus (HPV) vaccine in the United States and globally over the past 5 years.

This new report also presents priorities and strategies to ensure that more people will receive this critical cancer vaccine.

Initial reports from the Centers for Disease Control and Prevention (CDC) and other organizations, unfortunately, showed that uptake was not as robust as it had been for other childhood and adolescent vaccines, with vaccination rates as low as 12% for girls in some parts of the United States.

In other words, we had a vaccine that could potentially prevent hundreds of thousands of cancers worldwide each year, but it was not achieving the level of uptake needed to maximize its potential.

When I became chair of the panel, co-members Owen Witte, Hill Harper, and I chose the HPV vaccine as the subject for our next report because we agreed that increasing HPV vaccination rates was a critical issue that had the potential for actionable recommendations.

The panel’s 2012–2013 initial report on the subject outlined four goals to address barriers to vaccine uptake:

Several cross-cutting themes were highlighted in these recommendations. For example, there was resounding agreement that messages about the vaccine coming from clinicians and public health officials should focus, unequivocally and unambiguously, on cancer prevention. So the report stressed the need to focus on the vaccine as a cancer prevention tool.

We also knew that it was essential to have buy-in right from the start from major stakeholders.

And, indeed, over the past 5 years, numerous organizations and agencies—including, but not limited, to NCI, NCI-Designated Cancer Centers, CDC, and the American Cancer Society (ACS)­—have devoted substantial resources and voiced strong support for funding to increase HPV vaccination uptake. Other high-profile reports, including those from the Cancer Moonshot Blue Ribbon Panel and Cancer Moonshot Task Force, echoed the panel’s call for action to increase vaccine uptake.

Since our original report was released, stakeholders have reported significant progress in vaccine uptake, but also continued challenges.

After consulting with many knowledgeable individuals, I decided that the panel could contribute to continued progress by conducting a check up on the status of HPV vaccine uptake. My approach involved consultations with experts, a review of the most current literature, and additional research.

Notable Progress, But More to Do

In the United States, HPV still causes nearly 34,000 cases of cancer each year. But the good news is that rates of HPV vaccination in the United States have increased over the past 5 years. On average, each year between 2013 and 2017, there was a 5-percentage point increase in adolescents who started the HPV vaccine series. 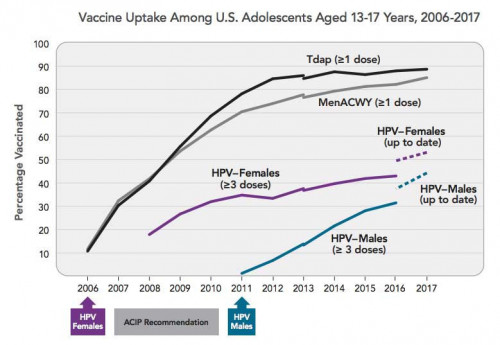 Nevertheless, we are still falling far short of target vaccination levels. As of 2017, for example, overall HPV vaccine coverage among US adolescents was 49%, well below the Healthy People 2020 goal of 80% of age-eligible adolescents. And HPV vaccination coverage remains lower than that of other adolescent vaccines.

The new report stresses that it is more important than ever that we reduce missed clinical opportunities to recommend and administer the HPV vaccine. Indeed, studies have shown that provider recommendation is one of the strongest predictors of HPV vaccine uptake.

Communication strategies and systems changes are essential to ensure that all eligible adolescents and young adults are offered the HPV vaccine when they visit their health care provider.

There is also a continued need to increase parents’ acceptance of HPV vaccination through evidence-based communication campaigns, such as those created by CDC and ACS. Thankfully, surveys indicate that a growing proportion of parents of unvaccinated teens are accepting of their children receiving the vaccine.

Ensuring that HPV vaccination is affordable and convenient for all US adolescents will also increase vaccine uptake.

This new report also highlights the fact that, globally, HPV is responsible for nearly 630,000 cases of cancer per year, and that the potential impact of HPV vaccination is greatest in less-developed countries, where the vast majority of cervical cancer cases and deaths occur and where HPV vaccination rates are disproportionately low. The report consequently stresses that the United States should continue to support implementation and sustainability of HPV vaccination programs around the world, particularly in low- and middle-income countries.

Importance of Partnerships and Collaborations

One remaining point from the new report that deserves emphasis is the importance of community and regional partnerships and collaborations.

Since the introduction of the HPV vaccine, we have seen new partnerships form to address the challenge of increasing HPV vaccination rates. For instance, in 2012, when we were first convening stakeholders for meetings ahead of our initial report, it was clear that cancer and immunization groups had not routinely partnered with each other.

But, working together, these stakeholders have accomplished some amazing feats, including raising awareness among the general public of the importance of HPV vaccination, supporting health care providers and systems in delivering the HPV vaccine, and contributing to global efforts to promote HPV vaccination. Indeed, they are largely responsible for creating the momentum needed to drive efforts forward.

Renewing the Call to Action: The Ultimate Goal Is Cancer Prevention

There are many reasons to be excited about progress that has been made in increasing HPV vaccine uptake, but there is still much work to be done. We should aim to prevent every possible case of HPV-related cancer. We have the tools to do so. Focusing efforts where they will have most impact and partnering for prevention will make a difference.

I salute everyone working to make sure those who are eligible to get the HPV vaccine do. It is work that will save lives.

This post was originally published on December 20, 2018, by the National Cancer Institute. It is republished with permission.