If you’re wondering how the hell I had a surprise PSA test and didn’t I feel the needle going into my arm, yes, I did. Let me explain.

I was a bit overdue for the normal tests that you have for your annual physical, and my doctor’s office called a week ago and told me I needed to come in for some blood work and a urinalysis. So I did.

I was going through the results online today, and the very last test listed was a PSA test. I was a bit surprised that they ran it considering we just ran one in December. The result? It came out 0.16 ng/ml. 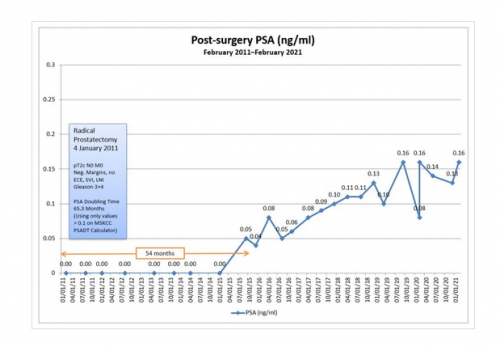 Obviously, that’s a step up from the December result of 0.13 ng/ml, but I’m not overly concerned about it because it’s relatively in line with my other recent results. The other reason is that I didn’t follow my usual routine for this PSA test.

When I know that I have a PSA test coming up, for a week before, I will abstain from activities that could cause it to read a little higher than normal. Because this was a surprise test, I didn’t do that and that may account for the bump up in the number.

Another reason not to be too overly excited is my PSA doubling time is 65.3 months.

Of course, because this was an unexpected test, I don’t have an appointment set up with the urology department, so we’ll just stick to the plan and see what happens when I retest in late June for an early July appointment.

On an unrelated note, because I work in a hospital, I was able to get both doses of the Pfizer COVID vaccine.

For the first dose, my arm was tender at the injection site for about 30 hours after the injection, but it wasn’t bad enough to warrant taking any pain medication like acetaminophen or ibuprofen. I had a mild headache late in the evening, but I may attribute that to just being up too late the night before.

The injection site for the second dose was less tender and for a shorter period, but I was pretty fatigued later in the afternoon and early evening (I received the injection around 10 a.m.). Nothing a good nap and a good night’s sleep wouldn’t cure.

It will be two weeks since the second dose this Friday, so I should have full resistance built up by then. I’ll continue to wear a mask and socially distance, as is recommended.

This post originally appeared on Dan’s Journey through Prostate Cancer on February 11, 2021. It is republished with permission.