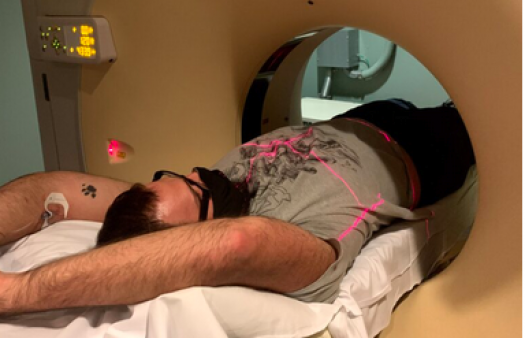 A Normal Scan in an Abnormal Year

In 2020, I’ve said numerous times that this year is anything but normal. In my life, there have been some ups (like interviewing Scott Hamilton and Patrick Dempsey) and some major downs (such as the loss of Conner). Things have been on an upswing for the past few months – shout out to Downey and Pepper. Despite this rollercoaster of events, my year seems to be ending in the same way as last year, at least in the medical realm. December 2019 marked my third year of clean scans, and this year turns out the same.

While I really didn’t do a great job of building up suspense, I thought I would just cut to the chase and share the good news. If that’s all you wanted to hear, I will bid you adieu and see you next December.

However, if you want the longer reflection, read on.

Oh you’re still here? Great! To continue, I had the scan after work on Tuesday, December 8th. Check in went as usual, and I had my IV hooked up. Something happened to the needle and it retracted by itself. This made me look like I was an extra in Saw II, but I was assured this was normal… or at least not a bad sign. The tech was very nice and she shared that she was also a cancer survivor. Despite the imaging center running behind (and giving me a little time to catch up on reading), it was finally time for the scan.

In what has become a tradition, I requested a picture of me in the machine. She happily obliged, and I think she did a fantastic job. Again, the scan was the usual procedure…“Breathe in. Hold your breath.”

The next day was Wednesday, which is my standard work from home day in this strange 2020 year.

I do this half because I am in meetings all day (which I can do from home) and half so I can snuggle with Downey and Pepper all day. Those percentages may not be quite accurate.

After all meetings were complete, I had an email notification that I had new results in my patient portal. I assumed it was more results from the blood work that I had in late November, but I was surprised to see it was the pathology report from the scan. Even though reading the December 2017 report early caused me more worry, I decided to click on it.

I scanned the report and saw the word “normal” literally ten times. Then I read the words that always send a feeling of calm throughout my body:

“No pathologic adenopathy or metastatic disease.”

I still had my follow up appointment with Dr. Maurer the following week in the afternoon of Tuesday, December 15th. As usual, the appointment went normally. After confirming that I was indeed still in remission, we looked at my scans, which still make no sense to me but I trust his judgement. We next reviewed my vitals, which were all in a good range. 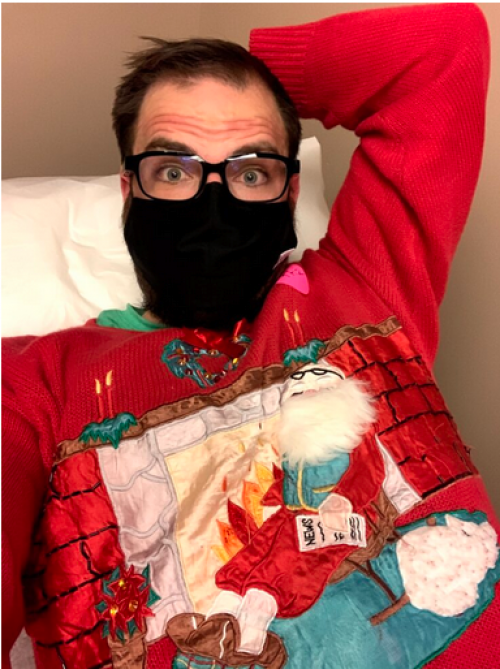 Waiting on the results of the tests. Peep my sweet Christmas sweater.Courtesy of Justin Birckbichler

We also talked about my antidepressants. I’ve been doing pretty good overall since summer and my life has become relatively more stable (which is not the norm in 2020). Because of these reasons, we started discussing if I needed to be on them anymore. I sometimes have some seasonal depression (seasonal affective disorder) in the winter (on top of the run-of-the-mill depression) so I asked if we could not make any changes until the spring. He agreed and we ultimately decided to try tapering off in March. Stay tuned for more on that front.

As the appointment drew to a close, I mentioned that I had a bit of a sore throat and a headache, but I thought it was just another sinus infection. Upon uttering these symptoms, Dr. Maurer ordered a strep swab, a flu test, and a COVID brain scrape…because this is 2020.

Unluckily, those tests really are invasive in my various facial orifices. But luckily, these were all rapid tests and came back negative. This same thing happened in 2018  (minus the whole COVID test thing) and I felt better the following morning, so fingers crossed on that being a repeat event!

As I look back, I realized that less than 24 hours later, I had already received my scan results.

I’m pretty sure this is a new record. I also realized I experienced record low levels of scanxiety. I really didn’t worry too much about the scan, if at all. Perhaps this is just becoming part of my normal December routine, or the small amount of time that passed didn’t allow me to worry…or maybe I just accept that 2020 is bananas and ruminating on a scan doesn’t chart up there.

This post originally appeared on A Ballsy Sense of Tumor on December 16, 2020.  It is republished with permission.