By talking about her cancer, she hopes to help destigmatize it.

According to the Centers for Disease Control and Prevention (CDC), HPV is a common virus that can lead to cancer of the cervix, penis, vagina, vulva, anus and throat later in life.

Each year, an estimated 14 million Americans contract the virus, which is spread through sexual or skin-to-skin contact. What’s more, HPV is linked to nearly 34,000 cases of cancer in women and men annually.

During a routine digital rectum exam about a year and a half ago, Cross’s gynecologist discovered a cancerous mass on her anus. “I was so not thinking anything was wrong because I didn’t have any symptoms,” Cross shared during a recent episode of CBS This Morning (which can be viewed above). “And [my doctor] gave me an exam and came around and said, ‘Well, I just want you to know, whatever it is it’s curable. It was like ‘What? What are you talking about?’”

She’s just glad to know that the vaccine Gardasil 9 can prevent nine different types of HPV, even in her 12-year-old twin daughters. (The CDC recommends that both boys and girls receive two doses of the HPV vaccine at ages 11 and 12. But the vaccine can be started as early as age 9. The goal of early vaccination is to protect children long before they are ever exposed to the virus.)

Recently, the Food and Drug Administration expanded the approval of Gardasil 9 from up to age 26 to up to age 45.

“I know that there are people who are ashamed,” Cross said. “You have cancer. Should you then also feel ashamed, like you did something bad because it took up residence in your anus?”

For related coverage, read “A Cure for HPV? Not So Fast...” and “HPV Vaccination Rate Low Among At-Risk Individuals.” 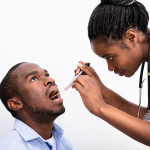