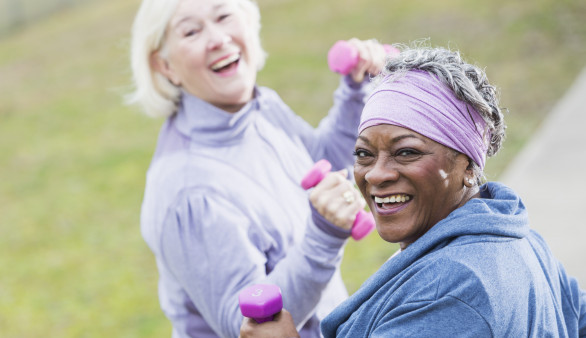 Engaging in exercise while receiving chemotherapy greatly improved cardiorespiratory fitness and was safe and tolerable, according to findings published in JACC: CardioOncology. What’s more, people who started exercising after chemo benefitted as well.

Physical activity is known to have benefits for people living with cancer. But the ideal timing of exercise in relation to treatment and its impact on the side effects of cancer therapy needs further exploration.

Gabriela van der Schoot, MSc, of the University of Groningen in the Netherlands, and colleagues aimed to establish whether exercise during or after chemotherapy was more effective at improving long-term cardiorespiratory health.

This study (NCT01642680) included 266 people with various types of cancer who were treated with curative chemotherapy; 139 had breast cancer, 95 had testicular cancer, 30 had colon cancer and two had lymphoma. They were randomized to exercise for 24 weeks either during cancer treatment or after it was completed.

In keeping with earlier studies, supervised exercise during chemotherapy was safe and well tolerated. Moreover, exercise helped alleviate the drop in cardiorespiratory fitness seen among patients undergoing chemotherapy. During chemotherapy, both groups experienced a decline in peak oxygen uptake and decreased muscle strength and reported increased fatigue and worse health-related quality of life. But by the end of chemotherapy, these measures did not change as much in the group that exercised during treatment compared with the group that waited. One year after the exercise intervention, peak oxygen uptake, muscle strength and fatigue did not differ between the two groups. And in both groups, health-related quality of life had improved compared with baseline levels.

In an accompany editorial, Neil Iyengar, MD, of Memorial Sloan Kettering Cancer Center said the study findings help “inform the clinical application of exercise and underscore the need for further investigation of exercise dosing, timing and individual response to equip clinicians with the data and knowledge that are required to prioritize exercise in cancer treatment planning.”

Click here to read the study.
Click here for more news about exercise for people with cancer.