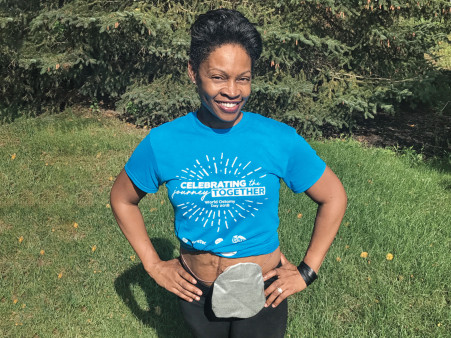 Living Well With an Ostomy

An ostomy is an abdominal opening created by surgery that diverts bodily waste into an external bag or pouch.

Kimberly Holiday-Coleman admits she felt embarrassed by her friend “Fred” when they first met, but now she’s comfortable going everywhere together.

Fred is her ostomy, an abdominal opening created by surgery that diverts bodily waste into an external bag or pouch. Holiday-Coleman has a colostomy, formed from the large intestine. Some people have an ileostomy, created from the small intestine, or a urostomy to pass urine from the kidneys. Ostomies may be needed after surgery for colorectal cancer or other conditions.

Holiday-Coleman received her colostomy in 2015, at age 47, when she had surgery for Stage II rectal cancer. The ostomy nurse suggested she give it a name to help her adjust. Now, as an experienced ostomate (as a person with an ostomy is called), she can talk—and even joke—about Fred.

“It’s a part of me,” says Holiday-Coleman, now 50, who lives in Lexington, Kentucky. “I’m so thankful for my ostomy because it allows me to be here with my family.”

The ostomy opening, or stoma, is reddish and round or oval. Liquid or soft stool drains through it into a pouch, which is held in place by an adhesive seal or ring. Pouching systems are odor-proof, and deodorizers can curb odors when emptying contents into a toilet.

Some people need only a temporary ostomy to let the bowel rest for several weeks or longer, before another operation is done to restore normal excretion. Others require a permanent ostomy because of the extent of their surgery. Less than 10 percent of colorectal cancer patients have permanent ostomies, according to the Colorectal Cancer Alliance.

Wound, ostomy and continence nurses (WOCNs) are trained to determine the best location for the stoma and to prepare patients for living with an ostomy. The American Society of Colon and Rectal Surgeons recommends that patients meet with an ostomy nurse before surgery for stoma site marking.

While surgeons look at the abdomen only when the patient is lying down, “patients live sitting, standing, moving and walking,” which affects stoma function, says Joanna Burgess, BSN, RN, CWOCN, advocacy chairperson of the United Ostomy Associations of America (UOAA) and an ostomy nurse in Cary, North Carolina. Skin folds, scars and other physical factors also affect results. “Ostomy nurses help the surgeon decide where to place the stoma—where the patient can see it best and where they can navigate it best,” says Burgess, who herself has a urostomy and colostomy resulting from treatment for childhood bladder cancer.

After surgery, patients and their caregivers should be taught about the types of pouching systems, how to empty and change bags and how to describe problems to their medical team. Pouch leaks and skin irritation are not normal, so speak to an ostomy nurse if these arise, Burgess says. Regular appointments with an ostomy nurse or at an outpatient ostomy clinic can help ensure ongoing success.

Before leaving the hospital, it is important to talk with a nutritionist about eating as an ostomate. At home, it is best to cook vegetables and fruits rather than eating them raw, to use ground meat and to slowly add new foods to the diet. A food diary is a good way to record how the ostomy functions after consuming specific foods or drinks.

“My biggest challenge is finding what I can eat, what Fred can tolerate and what he can’t,” says Holiday-Coleman. She juices her vegetables, eats berries but not hard fruit and does OK with chicken, but she can’t eat popcorn, which she once loved.

New ostomates often ask whether to tell people about their ostomy (it’s the patient’s choice), whether they can return to work (yes, unless it involves heavy lifting), what to wear (anything they want), whether they can shower, bathe or swim (yes to all) and whether travel, exercise, dating and sex are still possible (yes to all those too).

Finding practical help and emotional support is important. UOAA has about 300 affiliated ostomy support groups in the United States for ostomates and their caregivers. There are also ostomate groups on social media and at many hospitals and outpatient ostomy clinics.

During her recovery, Holiday-Coleman began walking slowly. She has now taken part in a muddy obstacle race and, with her family, in a 5K for UOAA. A former model, she traveled to Australia and appeared in a fashion show for people with disabilities.

She also discovered burlesque dancing and competed in a contest for the first time—and won. During the performance, she took off her clothes because “that’s part of the art,” she says. When the audience saw Fred with the ostomy bag she had decorated for the occasion, the crowd was silent at first but then cheered.

“People came up to me after and talked about their experiences with colostomy,” she says. “I realized that I had something to say that was important for people with ostomies and who have gone through cancer to hear—that we can still be sexy, feminine and active.”