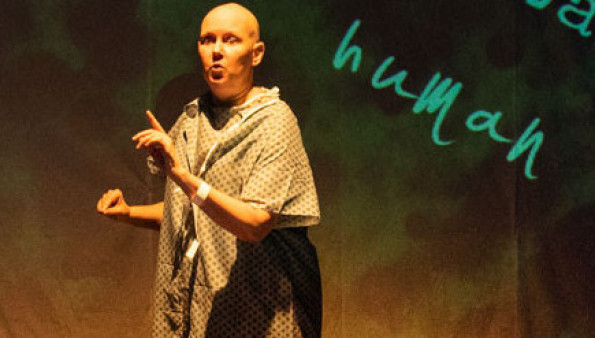 Erin Cronican, who has metastatic breast cancer, stars in a new production of Wit, a play about a woman dying of metastatic ovarian cancer.

She was a very young actress, just starting out in San Diego, and performed it in a reading for medical students at the University of California at San Diego “to help them understand what’s important,” she recalls. “They were armed with medical knowledge, but we wanted them to also be armed with compassion, with love.”

Cronican played Susie, the nurse who cares for the lead character, Vivian Bearing, PhD, a professor of 17th century poetry who specializes in John Donne’s Holy Sonnets, the best known of which includes the line “Death, be not proud.” As the Pulitzer Prize committee put it, “Only her mind and the sonnets of John Donne protect her from the relentless ferocity of modern medicine.”

Cronican played the role every year for three years and then in 2005 moved to New York City. “I did a lot of musicals, flashy Broadway stuff—New York loves the glitz and glamour,” she says. But she wanted something deeper, which led to her involvement in the creation of The Seeing Place Theater, a social justice theater ensemble in New York City (its motto: “It’s a safe place to experience dangerous theater.”) Says Cronican, who is its executive artistic director, “What I love doing is telling stories that make audiences feel things and think and maybe want to change their lives.”

In 2015, she herself was diagnosed with cancer—Stage II breast cancer. She turned to the play again, for consolation. “I pulled it off the shelf, to read something about what I was in for. I cried and cried and felt sorry for myself. It gave me a kind of sense to imagine what was coming.” She was treated successfully.

In 2018, however, she was diagnosed with Stage IV metastatic breast cancer. She pulled the play off the shelf one more time, but “not only for comfort.” She realized she needed to play the lead character in a new production. “It was time. I’m young to play the character, but maybe I earned the right to do it anyway,” says Cronican, who spoke to Cancer Health in between rehearsals in December 2021. The play opened just before the end of the year. 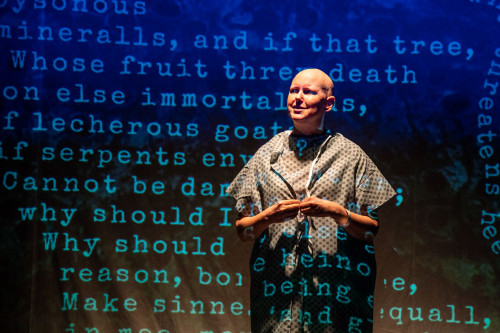 Erin Cronican playing the role of Vivian Bearing, PhD, in Wit at The Seeing Place TheatreCourtesy of Erin Cronican/Russ Rowland

“When I got rediagnosed, it was almost a fluke—I wasn’t having symptoms directly related to recurrence,” says Cronican. “I am a singer, doing an off-Broadway musical, but it was becoming more difficult to sing. I went to urgent care, opted for the X-ray, and they said, ‘You have pneumonia.’” It was August.

She was also told there was a little spot near her left breast that she might want to have examined. She had had surgery on that side, so, she was told, it was most likely residual surgical-related swelling. A mammogram in September revealed nothing suspicious. But then she pulled up her earlier X-ray on her phone and handed it to the technician, who used it to guide an ultrasound to the spot on her breast. That led to a biopsy in October, confirming recurrence. Then, a PET scan on Election Day 2018 found metastasis to the lungs. Evidence of metastasis to the bone and brain soon followed.

Over the winter, she became very, very ill, “to the point that my spouse and friends and family thought I was going to die,” she says. “I couldn’t eat or breathe, was on oxygen, couldn’t lie down. Then, magically, I started chemo and, within four months, got back to what I now consider sort of a normal life.” She wasn’t a candidate for immunotherapy, but chemotherapy kept her cancer stable for more than two years. 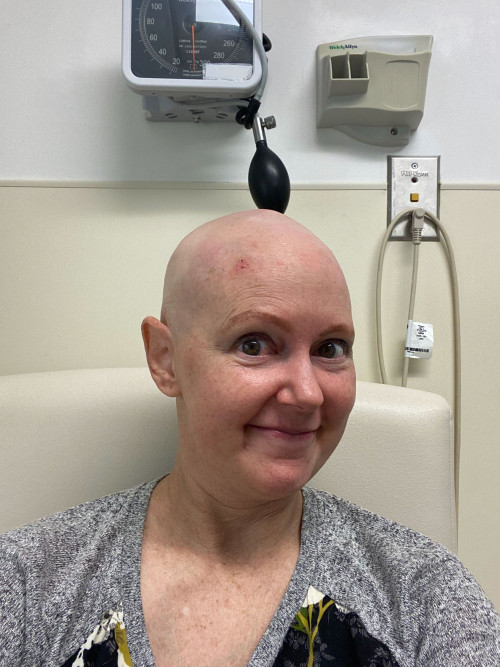 Toward the end of April 2021, though, she had new recurrence. She switched to a different chemotherapy and had some positive results but had also developed new spots. Toward the end of fall 2021, she several seizures due to new growth in her brain. “I’ve been mapped for proton therapy”—a form of precision radiation therapy that can have fewer side effects than standard radiation—“but we’re waiting to use that that until I really need it.” If the brain metastasis approaches her spine, she’ll get the radiation.

How Are You Today?

Wit opens with professor Vivian Bearing walking on an empty stage, pushing an IV pole. “She is fifty, tall and very thin, barefoot, and completely bald,” read the stage directions. (“I’ve been on chemo since 2019, but it wasn’t until August 2021 that I lost my hair,” says Cronican. “At least I don’t have to wear a bald cap. It’s a silver lining to one of the more horrible side effects.”)

Bearing addresses the audience: “How are you feeling today?” It’s not her customary greeting, she admits—she prefers hello—but it’s the one she now gets many times a day. “I just say, ‘Fine,’” she says. “Of course, it is not very often that I do feel fine.” She goes on, “I am waiting for the moment when someone asks me this question and I am dead. I’m a little sorry I’ll miss that.”

As a patient, Bearing is anything but patient. She does not suffer fools gladly, nor has she ever in her brilliant academic and teaching career. She compares her situation to a play. “I have been, at best, an unwitting accomplice,” she admits. “It is not my intention to give away the plot; but I think I die at the end.”

Yet while her sharp wit sheds a cold light on the humiliations and absurdities of advance cancer care, she also, slowly, begins to realize that her intellectual brilliance isn’t enough to carry her through. Later in the play, she says, “Now I suppose we shall see, through a series of flashbacks, how the senior scholar ruthlessly denied her simpering students the touch of human kindness she now seeks.”

And then, the play introduces a kindly nurse, Susie, who talks with her openly and honestly and, in dramatic fashion, protects her wishes and dignity at the end of her life. Says Cronican, “Susie is the one who [gives] Vivian the first, and most consistent, show of compassion.”

A Real Life Within a Play

“What draws me to this play, this character, [is that Bearing is] a person who has valued research and the intellectual breakdowns of life and death and God, like an intellectual game, like a puzzle,” says Cronican. “She learns, through the course of the play, that the intellectual puzzle is not what makes you feel safe. It’s love and community and care. She almost learns it too late.” With Susie’s help, she faces her choices, including giving in to morphine and making the decision to opt for a do-not-resuscitate order. Cronican quotes the playwright: “Vivian is not allowed to be free until she gives up her relentless need for control.”

Cronican is simultaneously dealing with her own vulnerabilities. “I’m working on openly expressing myself,” she says. “It’s hard. I’m not used to it. I’m very good at it onstage as an actor, but in real life, I’d rather just hide what I’m feeling. But that leaves me shut down or angry and isolated, so no one really knows how I feel. It’s odd. I talk about what’s going on from a very dispassionate place, even though I’m a passionate person. Inside, I’m screaming and throwing a tantrum, but outside, I have a hard time expressing that.”

Friends don’t always help. “Nine times out of 10, when I say I have Stage IV metastatic cancer, which is terminal, people will respond, ‘You’re so strong, you’re going to beat this.’ Do I tell them the truth?” The truth is that her doctors are trying to relegate her cancer to a chronic disease, but a cure is not in the cards.

When she is honest, she is sometimes told she’s being negative. So she winds up being reassuring. “Then I start taking care of them, which makes me feel invisible.” Her advice: “For those who care about someone who’s just diagnosed, just say, ‘I want you to know that I love you. I am here for you whatever it is you want and need, and it might change day to day. You never have to be embarrassed. We can hang out and never talk about it or always talk about it.’”

She admits that the role has been challenging. “I’m facing my own mortality in a sort of intellectual way in the play,” she says. “I’m playing myself but not playing myself.”

For about a year after her Stage IV rediagnosis, she didn’t make plans, she explains, but then something changed. “I realized I can dream, I can plan,” she says. She is trying to learn the lessons of Wit a lot earlier in her cancer journey than Bearing was able to.

“I’ve been lucky,” she says. “Day to day, I’m generally not fatigued. I could be here 10 more years. I am trying to relax and be free before I have to have morphine. For me, I am trying to play my life, so I don’t put off anything. My life may get cut off, but there’s joy in learning. Once I realized I could still create my life, it became a lot easier.”

Wit, starring Erin Cronican as Vivian Bearing, runs through through January 16, 2022 at The Seeing Place Theater. “An intimate, moving and timely production,” wrote one audience member on the website Show-Score. “Erin Cronican shines in the lead role, supported by a tremendous cast and brilliant staging.”

To read more about metastatic breast cancer, see “No Stopping.”