The decrease is largely due to improved lung cancer treatment, but the impact of COVID-19 is not yet known.

Cancer death rates in the United States have fallen continuously from 1991 through 2018, adding up to a total decrease of 31%, according to the American Cancer Society (ACS). The overall cancer death rate dropped by 2.4% from 2017 to 2018.

These figures, along with details about the most common cancer types among men and women and cancer incidence and mortality by state, are reported in the ACS annual report Cancer Statistics, 2021. The organization has been reporting such data for 70 years. The report appears in the ACS journal CA: A Cancer Journal for Clinicians and an accompanying report for the public, Cancer Facts & Figures 2021. 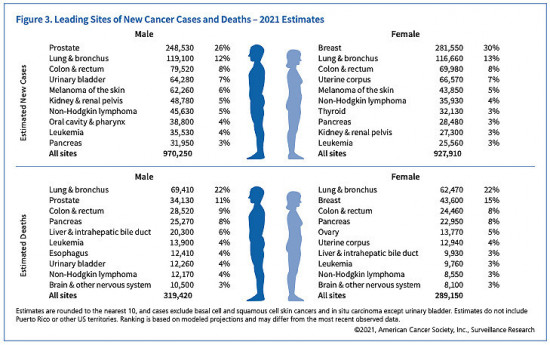 Impact of COVID-19
The ACS report estimates that almost 1.9 million new cancer cases will be diagnosed and nearly 609,000 Americans will die from cancer in 2021. However, these projections are based on incidence and mortality data through 2018 and thus do not account for the impact of the COVID-19 pandemic on cancer diagnoses or deaths.

Numerous studies have shown that cancer screenings have been put off and treatment has been delayed due to disruptions related to the pandemic. In an editorial in Science magazine last summer, National Cancer Institute director Norman Sharpless, MD, estimated that reduced screening and the resulting delays in diagnosis and treatment could lead to nearly 10,000 additional deaths from breast cancer and colorectal cancer alone over the next decade.

“The impact of COVID-19 on cancer diagnoses and outcomes at the population level will be unknown for several years because of the time necessary for data collection, compilation, quality control and dissemination,”  Rebecca Siegel, MPH, lead author of the ACS report, said in a press release. “We anticipate that disruptions in access to cancer care in 2020 will lead to downstream increases in advanced stage diagnoses that may impede progress in reducing cancer mortality rates in the years to come.”

The new report contains a special section that includes information about COVID-19 in people with cancer and a discussion of the public health impact of the pandemic across the cancer care continuum.

Declines in Lung Cancer Death
While progress in reducing mortality due to other leading causes of has slowed, it has accelerated for cancer (the second leading cause).

The ACS report estimates that 3.2 million cancer deaths were averted between 1991 and 2018 due to reductions in smoking, earlier detection and improvements in treatment. This is particularly reflected in long-term declines in mortality related to the four leading cancers: lung, breast, colorectal and prostate.

Lung cancer is the most common cause of cancer death, accounting for more deaths than breast, prostate and colorectal cancers combined.

“Sluggish progress against these latter cancers in recent years contrasts with accelerating reductions in the death rate for lung cancer, from 2.4% annually during 2009 to 2013 to 5% annually during 2014 to 2018,” according to the ACS. “As a result, lung cancer accounted for almost half (46%) of the overall decline in cancer mortality in the past five years and spurred a record single-year drop (2.4% from 2017 to 2018) for the second year in a row.”

These rapid reductions reflect better treatment for non-small-cell lung cancer (NSCLC), the most common type. Two-year relative survival for NSCLC has increased from 34% for patients diagnosed during 2009 through 2010 to 42% for those diagnosed during 2015 through 2016, according to the report. What’s more, survival has increased by 5% to 6% for people at each stage of NSCLC diagnosis. However, two-year survival for small cell lung cancer has not seen a similar improvement, remaining at 14% to 15%.

Cervical Cancer Remains a Concern
Cervical cancer is one of the types caused by the human papillomavirus (HPV). While this malignancy is almost 100% preventable through screening and HPV vaccination, cervical cancer continues to cause thousands of deaths in the U.S. each year.

Approximately 11 women per day died of cervical cancer in 2018, half of them in their 50s or younger, and it is the second leading cause of cancer death among women in their 20s and 30s, according to the ACS.

Although the HPV vaccine could nearly eliminate cervical cancer, U.S. vaccination rates remain far below those in other high-income countries. Just 57% of adolescent girls are up-to-date on vaccination in the U.S., compared with 80% in Australia and more than 90% in the United Kingdom.

The Centers for Disease Control and Prevention recommends the Gardasil 9 vaccine, which prevents nine types of HPV, for boys and girls at age 11 or 12, with catch-up vaccines up to age 26 for those not immunized as adolescents. The ACS recommends starting earlier, at age 9. The vaccine is for adults up to age 45, and vaccination for those ages 27 to 45 is a shared decision to be made by patients and their providers.

A decline in vaccination rates is another fallout of the COVID-19 pandemic, and the ACS recently launched a new campaign to keep HPV vaccination on track.

Sex, Race and Geographic Disparities
The new report also contains information about the leading cancer types for men and women as well as racial/ethnic and geographical disparities in cancer cases and outcomes. The ACS included several highlights in its press release announcing the report. 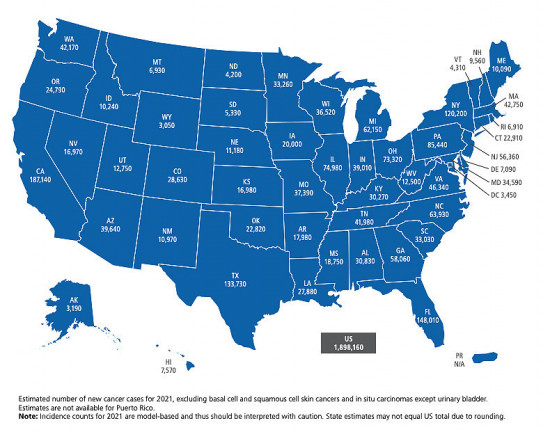 “While recent advances in treatment for lung cancer and several other cancers are reason to celebrate, it is concerning to see the persistent racial, socioeconomic and geographic disparities for highly preventable cancers,” said ACS chief medical and scientific officer William Cance, MD. “There is a continued need for increased investment in equitable cancer control interventions and clinical research to create more advanced treatment options to help accelerate progress in the fight against cancer.”

“Fifty years after President Nixon signed the National Cancer Act to make cancer a national public health priority, we continue to see its lasting impact on progress against cancer,” the American Society of Clinical Oncology said in a statement. “While we celebrate this remarkable progress, the report lays bare the stark reality that disparities in cancer outcomes continue to disproportionately affect Black, Hispanic, Asian American and Alaska Native people. The findings in this report reflect the disheartening truth that a patient’s race, socioeconomic status and geographic location can determine one’s chances of surviving cancer. The oncology community must confront and address the complex forces and systems that have led to these unacceptable gaps in cancer outcomes.”

Click here to read the report in CA: A Cancer Journal for Clinicians.
Click here for Cancer Facts & Figures 2021.
Click here to learn more about the impact of COVID-19 on cancer care. 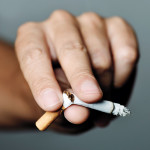 Missourians Celebrate Historic Funding to Stop and Prevent Tobacco Use

Do You Understand the Terms Found in Electronic Health Data? 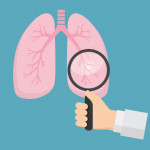