Love in a Time of Cancer

Call it kismet. When Dann Wonser and Genevieve de Renne met in 1991, they were both working in the field of mental health at different hospitals in the Providence Health services system in Portland, Oregon. Dann was a mental health counselor, while Genevieve was an occupational therapist. When a mutual colleague first introduced them, they were both married to other people but kept bumping into each other while attending work-related events.

A few years later, both divorced, they wound up at a wedding for two coworkers. This time around, they surrendered to the undeniable attraction between them, and the two danced all evening.

Initially, their age difference—Dann is 63, and Genevieve is 71—caused Dann to agonize about asking her out. But Genevieve made the first move and invited him to join her on a walking tour of art galleries around town.

After dating for a little over a year and then living together, they got married in 1996. The two don’t have children together, but Genevieve has a son, 51, and Dann has two sons, 36 and 39, from their previous marriages.

In 2006, Dann was diagnosed with Stage III lung cancer. By this point, Genevieve had helped her identical twin sister, Charlotte, recover from breast cancer and had lost her mom to uterine cancer. Dann had adenocarcinoma, a type of non-small-cell lung cancer. It showed up as a spot on his lung after his primary care doctor ordered an X-ray to evaluate a stubborn pain in his lower back. His oncologist ordered two rounds of chemo, followed by a lobectomy to remove the upper left lobe of his lung and then two more rounds of chemo to sweep up anything that might be left over.

“I’ve had several family members pass away from cancer,” Genevieve says. “It’s just a hard experience when you’re living it and watching with that helpless feeling because there’s nothing that you can really do. You have to walk that line between helping and enabling, and you can’t enable somebody.”

Most experts agree that a cancer diagnosis can either strengthen or destroy romantic relationships. For Dann and Genevieve, the difficult experience was eased by the trust that they’re a team, which brought them closer together than ever. But the challenges they faced also forced them to evolve as a couple.

Shortly after Dann’s diagnosis, Genevieve rekindled her lifelong love affair with painting and took a two-year art course in Washington state with her sister. It was tough to be away from Dann for the weeklong workshops that took place every three months. But Genevieve came back with a new body of work, full of symbols. She would draw while waiting for Dann to complete his chemotherapy treatments.

“I have healing codes in all of my work,” she says. “It just comes from that intuitive right brain part of me that says, ‘Yes, this is what’s needed.’ My art is not just a flower on the canvas; it’s like a multidimensional healing portal, a vibrational energy source that I think art taps into.”

She helped Dann, a commercial real estate broker who semi-retired this year, find a top oncologist and a surgeon. When he started chemo, she watched him lose his hair and experience nausea and brain fog. “There were times when I was sitting on the sofa just staring out into space,” he says.

Dann would try to reassure his wife that he was doing fine by saying that the side effects “just tell you that the chemo is working and doing its job.” 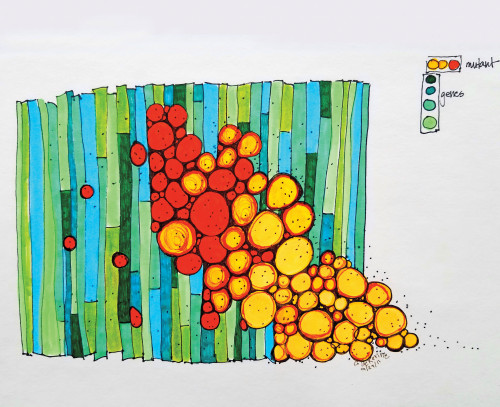 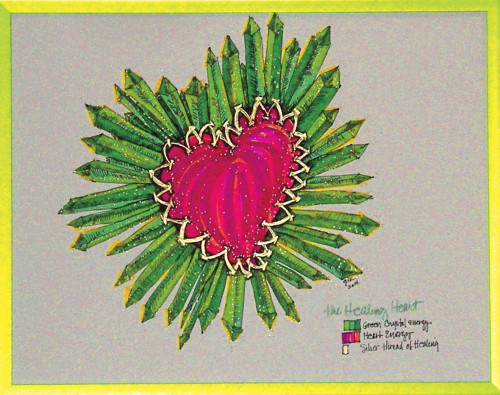 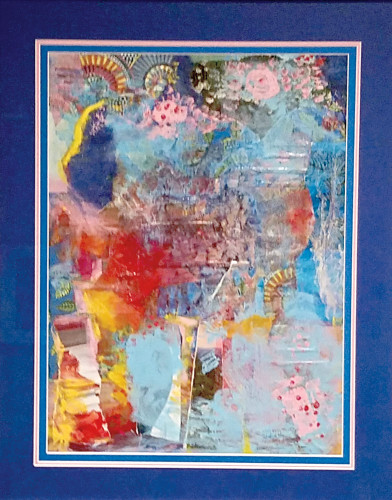 Cancer can cause individuals to feel isolated, but the illness affects everyone in a family. Although Dann is ultimately the one responsible for making decisions about his care, Genevieve, as his wife and care supporter, shares in his experience.

One of her hardest tasks was learning how to be a supportive spouse and knowing when to relinquish control. Genevieve accompanies Dann to his appointments but respects his autonomy to be his own spokesperson.

“Dann definitely did not want me to speak for him,” she says. “Although I like to control situations, I had to channel that in different ways.”

The way she does this, Dann says, is to do “every other thing humanly possible to help me live.”

One piece of advice they have for couples facing health problems is to communicate honestly and openly about each other’s feelings and the changes that can arise and challenge their partnerships.

“A few days after my diagnosis, I remember lying in bed with Genevieve and telling her that no matter what happened, I wanted us to share with each other whatever concerned us—medically and otherwise—that we not keep secrets from each other and that we were going through this together,” Dann says. “She said yes, and since that moment, we’ve been closer.”

Perhaps the most terrifying moment in Dann’s cancer journey happened near the five-year mark in 2011. When he reported for a routine CT scan, after showing no signs of cancer for four and a half years, the results showed hundreds of little spots in his lungs. His oncologist had relocated, so he was assigned to another doctor in the practice. But his new doctor was unperturbed.

“He didn’t think it was lung cancer, so he said, ‘Let’s wait until the next scan in another four months,’” Dann says. By then, there were thousands of spots, and they were bigger. His doctor still didn’t think it was cancer. “He thought it might be lupus or tuberculosis. But he ordered a biopsy to find out,” Dann says. Then he told Dann that if it turned out to be cancer to have the office connect him with another doctor, since he was not a lung cancer specialist.

Both Dann and Genevieve were shocked. His first oncologist had been a lung cancer specialist, so they had assumed that this doctor was one too because he was a partner at the same practice. “He was a specialist in prostate cancer,” Dann says. “That was a lesson for me about needing to be my own advocate and doing some research.”

The biopsy results showed that Dann had progressed to Stage IV metastatic lung cancer. “I was stunned and drove straight over to Genevieve’s office,” he says. “We were just dumbfounded. It didn’t make any sense to her.”

Later that night, Dann overheard Genevieve in tears on the phone as she told her sister that she didn’t know what to do. “I’ve never felt so helpless in my life,” he says.

After a few days, the two rallied, and the teamwork commenced. His clinic couldn’t refer him to a lung cancer specialist, but Genevieve found two reputable oncologists he could see. Dann called and learned that both were available. “We immediately switched to Oregon Health and Sciences University,” she says.

In 2011, Dann was unaware that there were targeted therapies or immunotherapies for lung cancer. But at the first appointment, Dann learned that treatments were available for two genetic mutations, including an EGFR inhibitor, a targeted therapy, that had just been approved for lung cancer by the Food and Drug Administration (FDA) and would be available in two weeks.

The doctor asked whether he wanted to participate in a research project to study the lung cancer genetic mutations that were known at that time. Currently, there are seven mutations with FDA-approved targeted therapies. (To read more about genomic testing and precision medicine, see “Meeting Your Match,”and Basics: Lung Cancer Treatment.)

Since the previous clinic had told him he didn’t have the right mutations, Dann decided to start chemo instead of waiting for the targeted therapy. That’s when he learned he had one of the treatable mutations after all. The news made him even more grateful for Genevieve’s tenacity in helping him find a bona fide lung cancer specialist.

“If I hadn’t switched to the new hospital system and gotten retested, I wouldn’t have known, and they would have treated me with chemo, and that would have been the end of it,” he says. “I’ve had several lucky breaks that have kept me alive. But none of us should have to rely on luck, and that’s why we need to keep research going.”

In 2014, fortune again smiled on Dann when a friend of his who had the same lung cancer mutation told him he was participating in a clinical trial in San Diego for a new experimental targeted therapy, a second-line EGFR inhibitor used only for people whose cancer has progressed after using a first-line EGFR inhibitor.

Dann’s oncologist had run out of options, so Dann told him about the clinical trial, which was set to close in a week. The trial coordinator was going on vacation so he had to submit all his medical records that same day. After Dann called all his contacts in the hospital systems, at 5:30 p.m., on the last day of trial enrollment, he received an email. He’d been given an appointment for the following Tuesday.

Dann says the new drug, which he still takes, was quickly approved by the FDA because the results were so outstanding. “The average time on it without progression is 13 months, and I’ve been on it now six years without progression,” he says. “I’ve been really fortunate.”

As time passed, Dann and Genevieve also blossomed individually within their loving relationship. Dann, an extremely private person, opened up to others living with cancer. He started a blog called Dann’s Cancer Chronicles and shared his story in a book titled Second Wind: Thriving With Cancer. All the profits from Dann’s book benefit two lung cancer organizations, LUNGevity and the Go2 Foundation for Lung Cancer.

As for his wife, Dann says, “What hit me over time is the depth of Genevieve’s heart; it’s been the greatest gift in my life.”